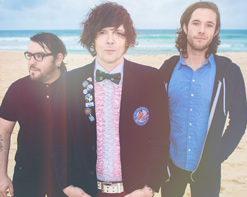 Coming off a string of acclaimed EPs, Beach Slang’s first album, 2015’s The Things We Do To Find People Who Feel Like Us, won remarkably effusive acclaim from a number of critics, and wound up on several “best-of-the-year” lists. James Alex wrote much of A Loud Bash Of Teenage Feelings on that album’s support tour, during which he spent a lot of time with the kids who’d picked up the record.

“A lot of the songs [on Loud Bash] are the stories of the kids who got turned on to Beach Slang by the first album,” said Alex. “They’re autobiographical, too, but kind of at a remove—I’m not that young kid anymore, but I used to be.”

“Punks In A Disco Bar” speaks to very essence of Beach Slang. The video, shot in the style of an old Super 8mm camera, follows a small group of youths across the city night. Some might call them misfits, some might call them outcasts, but to James Alex they are his people. The kind of kids that might not fit into conventional packaging, but in each other they’ve found a community where they can truly be themselves.

In a parallel script, a rugged old man with the look of a Texas rancher cruises the streets in his whopping Cadillac convertible. Though it’s unclear throughout how the two stories intertwine, by the end the two threads come together in a dimly lit parking garage. Mike Katzif from NPR Music accurately describes the mood, saying “like we’re watching the first act of a horror flick, just moments before something terrible goes down… One could easily imagine the narrative continuing in future songs’ videos.”

We’re super pumped to be a part of the Beach Slang team once again, and are anxious to get this video front and center in your programming. Beach Slang has a limited number of tour dates this fall, and the new album A Loud Bash Of Teenage Feelings is available on 9/23 on Polyvinyl Record Co., so get in while the getting’s good! Contact Andy Gesner and the HIP Video Promo staff at (732)-613-1779, email info@HIPVideoPromo.com. You can also visit www.BeachSlang.com or www.PolyvinylRecords.com for more info on Beach Slang.

For info about other Beach Slang music videos, click HERE