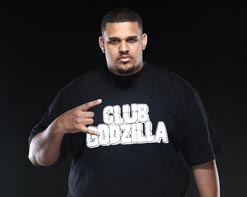 He calls himself the Club God — and if you’re a fan of Texas hip-hop, it’s doubtful you’ll dispute his claim. Over the last few years, BeatKing has become an enormous presence in Houston music, and the rest of the country is waking up to his distinctive style. The rapper and producer has become a H-Town linchpin through his own sweat: he’s been an independent artist from the beginning of his career, and he’s built his empire on inventiveness, good humor, swagger, and irresistible beats.

And because he’s got no big label behind him, Underground Cassette Tape Music, a collaboration between BeatKing and former Three 6 Mafia member Gangsta Boo, took the world by surprise upon its release in mid-2014. It didn’t stay a secret for long. The free mixtape was a searing but perfectly calibrated fusion of syrupy-slow, glowering Houston hip-hop and rambunctious, sexed-up Memphis rap, and won critical plaudits as well as popular acclaim. Rolling Stone and MTV counted Underground Cassette Tape Music among the best hip-hop albums of the year;  Grantland called the set “the mixtape we’ve been waiting 14 years for.”

The success of Underground Cassette Tape Music has heightened the anticipation for Club God 4, the latest in the series of BeatKing mixtapes. The Houston rapper’s undeniable skill at guerrilla marketing has helped, too. BeatKing has become famous for his rapid musical responses to viral video, and his own songs and clips about popular Internet-related subjects have earned him more than a million plays. He’s been tireless about inserting himself, often hilariously, into the conversations preoccupying social media. In his own words, from an online freestyle : “Y’all ain’t figured out my strategy yet, hm?  I sit at home and watch the scandal and wait for the dumb shit to happen.”

As good as he is at spotting trends, he’s aware of the hip-hop verities, too. The new video for “Stopped” revolves around the classic block party and cruising the streets in some of the most high end and wildest cars in the state of Texas. A wide cast of characters make up this clip, but ultimately they are all spectators to the main event: BeatKing himself, front and center. Director Michael Artis captures the essence of party which slow pans and rich colors and enough action to satisfy even the most insatiable hip-hop fan.

Here at HIP, we are incredibly thrilled to be working with such an epic and high profile talent like BeatKing. You can contact us here to hook you up with whatever you may need to get this video into your programming. Hit up Andy Gesner and the HIP Video Promo crew at (732)-613-1779 or email us at info@HIPVideoPromo.com . You can also visit www.BeatKingKong.com for more info on BeatKing.