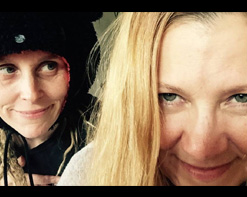 Why on earth would a band ever want to disassociate themselves from two of the most iconic names in Rock music? For Beaux Cheveux, the comparisons come all too often. Mainly because the band is made up of members from AC/DC & Led Zeppelin… Well, sort of. Guitarist, Adrian Conner is Angus Young in the all-female AC/DC tribute band, Hell’s Belles, and drummer Clementine is Bonzo, drummer of the legendary all-female Led Zeppelin tribute band, Zepparella. Their two-piece super-group, Beaux Cheveux, has joined forces to break down all boundaries and flex their considerable muscle in the world of original music. Their debut single, “Deeper Feeling”, abolishes comparisons of any sort, bringing an entirely new sound to the modern musical landscape.

The group was brought together in 2015 by their own personal love of songs, past and future. The only problem was they lived thousands of miles away from each other. This was barely a bump in the road for these dreamers. Clementine and Adrian began trading audio files from San Francisco to Austin to collaborate. After two years of long-distance songwriting, the band has perfected the Beaux Cheveux musical mosaic. With one foot in the future using electronic textured instruments, and one foot in the roots of 70’s rock where guitar and monster drums reigned supreme, they’ve conjured up their trippy, dream-pop style.

“Deeper Feeling” is the first single off Beaux Cheveux’s forthcoming debut album entitled, Ro Sham Bo. This Tom Tom Club meets Bananarama ear candy kicks in with a classic 70’s guitar tone, neurotically shredding the blues with a slide and some attitude. Behind the riffs are a clean sounding natural drum kit, with some layered electronic samples, making it impossible not to groove to the rhythm. The chorus explodes with harmonizing vocals for an incredible release after the tight beat. This compelling sonic landscape is aided by a beautifully organic homegrown video where the dynamic duo show the world that they take everything seriously… except themselves! Traveling, dancing, wearing masks, impersonating animals, singing to skulls, spending time with nature, and of course, jamming, are just some of the antics fans will find in this endlessly fun video.

It’s a true honor and profound privilege to bring Beaux Cheveux in the fold here at HIP Video Promo and we’re ecstatic to share this new “feel good” video with you and your viewers. Please don’t be shy about getting in touch to let us know what we can do on our end to secure this wonderfully crafted debut music video the attention and exposure it deserves. Please contact Andy Gesner and the HIP Video Promo team at (732)-613-1779, email us at  info@HIPVideoPromo.com for more info on Beaux Cheveux.