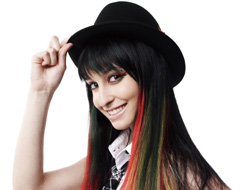 Hello, it’s Andy Gesner and the HIP Video Promo staff, here to share the news about an inspiring singer with an impressive track record of overseas success. Twenty-year old Becca of Portland, Oregon, isn’t well-known in the United States — yet. But on the other side of the Pacific, her music has made her a multimedia star. Her power pop songs have found a mass audience in Japan, and she’s appeared at festivals and conventions all over the famously-discriminating nation. “Guilty Pleasure” and “Falling Down” — both cuts from her Sony Music Japan debut — were used to score the opening and end credits of the hit anime Ultraviolet: Code 044. (Becca also voiced the anime’s heroine!) The outrageously-catchy “Shibuya”, her tribute to Tokyo’s most fashionable district, became a Japanese viral hit last year, and a wild chiptone remix only increased the young singer’s popularity.

There’s nothing exclusively Japanese about Becca’s work. On the contrary: she writes and plays in a kinetic style that will be familiar to any American radio listener. Becca sings infectious, instantly identifiable pop-rock spiked with energetic vocals and buzzsaw guitar; apparent influences include Joan Jett and The Pretenders, and fans of Paramore, Demi Lovato, and Avril Lavigne will find plenty here to love. U.S. programmers are already excited about the upcoming Alive!!, testifying to the young singer’s global appeal. The aching “Falling Down” has been featured in FX’s Damages, and, thanks to the ‘net, Becca has already developed a devoted stateside following.

Nevertheless, for most American listeners, “I’m Alive” will be their first exposure to Becca’s music, and we’re confident it’ll make an impression. Co-written by Lilith Fair veteran Meredith Brooks (who has worked with Becca since the singer was in her early teens), it’s a rousing empowerment anthem, written in the wake of tragedy but still resolutely upbeat. The singer is, as always, passionate and emotionally direct, and her band backs her up with a tight, confident performance. The result? A track that’s likely to be a hit on both sides of the Pacific, and a bold reintroduction of Becca’s sound to her native country.

You don’t get to be a pop star in Tokyo if you aren’t winsome (kawaii is the tough-to-translate word for that crucial combination of cuteness and power that invariably delights Japanese audiences), and Becca is certainly video-friendly. With her long, multicolored locks, bright nail polish, and playful fashion sense, she looks the part of the international pop sensation. Exposure to gigantic festival crowds in Japan has gotten her comfortable in front of the camera, and she dominates every frame of the “I’m Alive” clip. She leads her band in performance in an all-white room, but there are splashes of color everywhere: fluorescent rings of blue-green tape around her microphone, her red-orange tights, the lyrics to the song scribbled on a glass surface in lipstick shades. We watch as she entertains a succession of dancers — leather-clad punks, school-age ballerinas, long-haired wildmen in business suits, bodybuilders, Middle American cheerleaders. Bring ’em on, she seems to be saying; whoever they are, and wherever in the world they are, they’re sure to be inspired by “I’m Alive”.

We’re very excited to be working with the crew at Sony Music Independent Network to bring you this slam dunk new video. If you need more info, call Andy Gesner at 732-613-1779 or e-mail us at info@HIPVideoPromo.com.