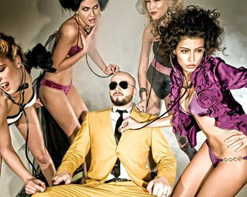 The upbeat and locomotive “Electric Girl” features staples of the genre, including heavy synth and a pumping kick. However, what makes “Electric Girl” a unique addition to the usually formulaic genre is Bedük’s vocal delivery, summoning the flavor of traditional Turkey in a most unexpected manner. Bedük sings the chorus line in a way that could be found in some of Turkey’s more traditional forms of music. However, it is blended perfectly into the modern atmosphere of the track, to create a fresh melody that hasn’t really been applied to pop, dance, and house music.

It is not surprising this approach has already placed Bedük as an innovative star in his home nation. Bedük’s music been recognized not only within Turkey, through numerous awards, but also throughout Europe! Bedük has won the Miller Music Factory award for “Best Dance Music Producer,” The Radio Bogazici Award for “Top Artist” and “Top Video” (for “Electric Girl”), and the Radev Awards 2010 prize for “Best Electro Pop Artist” in Turkey. He also gained the MTV Europe Music Awards nominations for “New Sounds of Europe,” representing Turkey, and for “Best Turkish Artist.” Bedük recently took home the International Consumer Summit awards for “Best Artist” and “Best Album” this year as well. He now hopes to dominate the American market with his fresh and award worthy take on the club scene.

The “Electric Girl” video is a top-notch work featuring the singer as he struggles to control an android girl that refuses to succumb to his will. She eventually derazzles Bedük to do her bidding with her fiber optic hair and punishes him by morphing him through the walls of the room. If there is one lesson to be learned here it is, do not mess with a superhuman android woman regardless of your aspirations. The clip is on par with modern American pop stars in quality, if not even more expensive in production. It’ll take only one glance at the zany and ambitious Bedük to see that he is here to twist the numbers around and reconstruct the listener’s expectations. It is also important to notice the shift in colors as the showdown between our protagonist and his cyber dream girl heats up with spills of red upon the previously elegant white setting.

“Electric Girl” is the leading single from Bedük’s fourth full length album GO. The record has already seen the top chart positions in Turkey, while the video has been a sitting on the throne of Turkish MTV countdowns and spearheading club parties across the European continent. The hero of reinvention is now ready to take his disco soul and contemporary vision to the American soil as he plans touring appearances for the rest of the year. We urge you to participate in the global music trade to import a style that transcends all borders as it ignites to spice up the American club scene. We’ve got lots of Bedük stuff here at the office and will make sure to forward it your way. If you need more info, call Andy Gesner at 732-613-1779 or e-mail us at info@HIPVideoPromo.com.