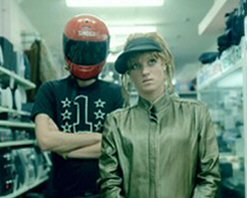 Hey, everyone, Andy Gesner and the staff here at HIP Video Promo! Thanks to our new friends Lisa Frank and Christian Taylor at Geffen Records, we are proud to be helping out promoting a truly unique and original video from up and coming Australian indie rock sensations Bumblebeez 81. Though their debut record does not come out until May 25, regional video programmers are getting a first taste of this unusual and eclectic musical aesthetic. Their debut video is for the song “Pony Ride”, from the forthcoming CD The Printz We are extremely thrilled to be teaming up with Lisa and Christian at Geffen to bring you this stunning clip.      Bumblebeez 81 is composed primarily of Chris Colonna and his younger sister Pia, aka Vila; aided and abetted by various friends and relatives. The pair hail from Braidwood, a small rural town in New South Wales, Australia

One of the many truly endearing qualities of this band is their adherence to the DIY aesthetic that we so fervently admire. Chris Colonna produces most of the tunes on his laptop, entering the studio only to mix down. The result is like nothing you’ve ever heard. There’s some hip-hop influence, at least in the beats and cadence, but it’s amalgamated with so many other influences the result is uniquely Bumblebeez. On this particular song, Chris’s driven, rhythmic vocal strides over the beat, woven in with some haunting acoustic guitar lines and a wide variety of electronic sounds. It’s insistent without being strident, and toe tappingly catchy despite the relative absence of “hooks” in the usual sense.

The visual is also unlike anything to come along recently. The Colonnas and two or three mates appear in distorted proportions, in such a way that they resemble living bobble head dolls. They stroll, drive, skateboard, even water ski through a variety of environments while performing the song. At one point Chris morphs briefly into a horse, and their various sidekicks drift in and out, even rolling by in an ice cream truck. And the ending will surely take you by surprise.

The band have had considerable success and attention in the course of their young career, having shared stages with bands like Yeah Yeah Yeahs and Death in Vegas. They will be opening for Radiohead on their Australian tour this Spring. They’ve also drawn rave press from the likes of Great Britain’s New Musical Express , and were recently featured on MTV’s “Music’s Rising Stars”. We’re very pleased indeed to be on board for a band and video truly worthy of the buzz. As always, we’ll be ready to meet your Bumblebeez needs. You can call us at (732) 613-1779, e mail info@HIPVideoPromo.com.