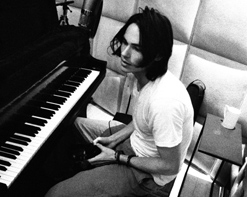 Hello to all my friends in music video land! It’s Andy Gesner and the staff from HIP Video Promo, back with some terrific new music from an artist that you’re going to be hearing lots about this summer. Scottish-born Ben Jelen is one of the most videogenic musicians we’ve seen in a long time. Tall, rock-star thin, and possessing a leading man’s good looks, Jelen commands the camera, and dominates nearly every frame in Sean Donnelly’s artfully-shot clip for “Where Do We Go”. The multitalented singer-songwriter could easily have made a name for himself as a fashion model – and he’s already distinguished himself as an actor, guest-starring on an episode ofHouse.

Of course, none of that would matter at all if his songs weren’t aces. Jelen has a knack for expansive verse melodies and Beatlesque choruses; he’s also an adept arranger, coloring his mixes with strings, horns, and other orchestral instruments without ever undermining the intimacy of his vocals. On Ex-Sensitive, Jelen flashes his instrumental chops, too, and decorates the tracks with piano passages that might be the envy of Coldplay. Produced by Linda Perry, the sparkling Ex-Sensitive is a turning point of sorts for Jelen: the reserve he’s maintained on prior recordings has been jettisoned in favor of a direct address. He’s always foregrounded his emotions, but this time around, he’s singing straight from the heart.

Jelen has already placed songs in movies and mainstream television programs, scoring scenes in One Tree Hill andSmallville and contributing the music to the Finding Neverland promo. “Where Do We Go”, the lead single from Ex-Sensitive, is similarly cinematic: the melody is soaring, the accompaniment is gently atmospheric, and the singer’s performance draws the listener tightly into the narrative. Here is a tale of romantic bewilderment, and the pain caused by a lover who won’t let go of her grip. Like all of Jelen’s songs, “Where Do We Go” is ambivalent, complex; it’s a portrait of a relationship in full, and it’s rich with nuance and emotional detail.

The clip for “Where Do We Go” literalizes that relationship: it’s the story of Jelen and a mischievous young woman intent on binding him to her will. He begins by minding his own business at his piano – his fingers grace colored keys, and he shuts his eyes, lost in his own private reverie. But soon the girl enters, drags him away from his playing, and shakes him like a puppet. Before long, Jelen has been stuffed into a steamer trunk, and his attractive nemesis has stuck sharp objects through its lid. No matter how she tortures him, and no matter how much pain she inflicts, he continues singing – often, he keeps his eyes shut, retreating into the fortress of artistic self-expression. Eventually, he figures out how to give her the slip, but not before she’s turned an infernal contraption on the trunk and ripped it to bits. Antique-looking titles and period costuming give the “Where Do We Go” clip the look of a silent movie. There’s also a chorus of line-drawing audience members: the illustrations sit in chairs and react to the woman’s advances, egging her on, oblivious to Ben Jelen’s suffering.

We are elated to be working once again with Mark Gracious, Gregg Allen, and all of the fine folks at Custard. They have been kind enough to bury us in advance copies of Ben Jelen’s Ex-Sensitive (dropping July 17), so we are prepared to meet all of your on-air giveaway needs! Ben will also be announcing a whole slew of tour dates in the near future and we would love to hook you up a video interview with Mr. Jelen. The HIP crew had the pleasure of seeing him in New York City last month and we assure you that this is a live show you do not want to miss! If you need more info, call Andy Gesner at 732-613-1779 or e-mail us at info@HIPVideoPromo.com.