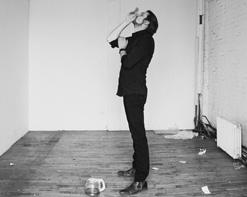 Some singers carry experience in their voices: they approach the microphone with the authority bestowed by the passage of time. Ben Lorentzen is still a relatively young man, but his personal story is no simple one, and he’s brought those complexities to bear on his ambitious and emotionally candid music. Born in the frigid northern regions of Norway, brought to musical maturity in the clubs of New York City and northern New Jersey, spiritual seeker and devoted husband to the controversial daughter of Reverend Sun Myung Moon, Lorentzen has cultivated a perspective – and a sound – unique in contemporary rock. It is, as you might expect from a person of his background, nuanced, searching, dynamic, and dream-haunted.

Yet it’s also exquisitely performed and powerfully sung. Lorentzen has made impeccable musicianship one of his hallmarks, and Pains And Pleasures Of Intimacy, his latest album, is a reminder of how bracing and provocative modern rock can be when it’s made and played by a master craftsman. As the title suggests, the album is both an exhilarating ride and a clear-eyed examination of the costs and rewards of relationships. It’s more than just smart: it’s wise.

The four songs we’re sharing with you today are standouts on Pains And Pleasures – they’re examples of Ben Lorentzen’s artistic breadth, his uncompromising songwriting and clear, forceful, unadorned singing. Lorentzen and video director Johan Anderson have made a series of conceptually-linked, beautifully shot videos for these songs that tell a continuous story of compulsion, spirituality, and the hazards of love. Footage of Lorentzen at the microphone (and in the pulpit of a lovely old church) testify to the singer’s command over his audience: he’s a ferocious concert performer, and he’s left stages all over the world smoking. But the real action in the clips is driven by a beautiful woman and a demonic, long-haired bartender – a dangerous-looking character – whose potent supernatural powers are put on destructive display.

Lorentzen and Anderson have taken great care with these clips: they were shot through vintage lenses and presented in a wide-screen format, just like an old movie. Nods to Bergman and film noir will be apparent to buffs; others will simply appreciate the richness of the cinematography and the intriguing nature of the narrative. Lorentzen grew up in Tromso, above the Arctic Circle – a place where the sun doesn’t rise for months at a time – and that chill is present in every black-and-white frame. “Crows” also features a long sequence in a beautiful old Mustang convertible worthy of a spy flick. It fits in perfectly here: everything about this project suggests a deep appreciation of the classics.

Here at HIP Video Promo, we strive to find new artists that have a fundamental uniqueness to their approach to music, and in Ben Lorentzen we are confident we have found exactly that. It would be our pleasure to get you hooked up with anything and everything you would need to get one or both of these videos into your programming, including autographed copies of his new CD and superbly crafted T-shirts. Please contact Andy Gesner and the HIP Video Promo team at (732)-613-1779, email us at info@HIPVideoPromo.com. You can also visit www.iam.BenLorentzen.com for more info on Ben Lorentzen.

For info about other Ben Lorentzen music videos, click HERE