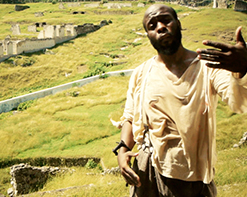 The country of Haiti is a beautiful place on earth. It is filled with soaring mountains, pristine beaches, and some of the most beautiful climate on earth. It is also home to a very proud and strong people who through the years have faced hardship, most notably the devastating earthquake in 2010 that decimated the land and ravaged the population. Combine that with the string of hurricanes that passed over the island in 2008, this beautiful country has been put to the test, but the people of Haiti (pronounced “Ayiti” in the homeland) are resilient and upbeat through it all.

Bernard Hyppolite is a Haitian-American artist whose pride in his homeland runs deep. “Ayiti” is his tribute to the land he called home where he “grew up with Auntie” and where “music would run free.” The content of the song is a nostalgic and personal look at one man’s journey as well as a musical history lesson that references Haiti’s forts, castles, the strong presence of Christianity and faith, as well as the darker, yet inspiring history of Haiti’s roots of a slave population that fought and won their freedom from the French. The lyrics of “Ayiti” are powerful enough to make us feel like we are at one with the people of Haiti and are being given a guided tour through the land.

The video for “Ayiti” is equally as powerful with its visual presentation of the people and the land that Hyppolite sings about. His goal with this video was to celebrate everything about Haiti, and with the stunning combination of natural beauty and deep culture he has accomplished just that. The video starts with Hyppolite acknowledging the past by being dressed like a slave from Haiti’s past, complete with chains, handcuffs, and even lashes on his back. As we follow him through the land he shows us the people of Haiti finding freedom and finding salvation. Faith has always been a powerful part of Haitian culture and has been the strength upon which they’ve drawn in times of both struggle and triumph. This video is not the end of the story, but rather a middle section of a long story that still has many more beautiful chapters to write.

We’re extremely proud to be working with Bernard Hyppolite to bring you this beautiful video and the joy it spreads. For more information please contact Andy Gesner and the HIP Video Promo crew at (732)-613-1779 or email us at info@HIPVideoPromo.com . You can also visit www.HIPVideoPromo.com for more info.