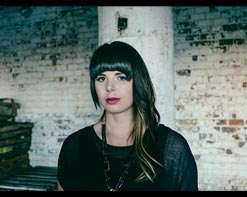 Meet the artist that The Riverfront Times describes as “a bourbon-warmed Neko Case”—Beth Bombara. Colliding wisdom and light cascades of vocals, this artist blends folk, country, and blues to make a unique and solid concoction. HIP Video Promo is excited to introduce two of Bombara’s eerie yet satisfying clips “Right My Wrongs” and “Long Dark Hallelujah.”

Beth Began her lifelong flirtation with the languages of melody and song in her teens. From the first time she picked up a guitar, a fire was lit that would carry her out of rural Michigan and on a path to becoming a performer on stages across the nation. With influences and background in punk, folk, alt-country, indie-rock, and beyond, Beth has evolved from a chord-strumming band member into a lead performer with singular voice, consistently delivering soul-tinged folk-rock with genre-defying lyrics and themes. Kicking off a tour in April to support her newest release, Raise Your Flag, Bombara gears up for a career of a lifetime in the following two clips.

Shot and directed in a lonesome warehouse, soon to be art exhibit, by Joshua Black Wilkins, “Right My Wrongs” was written about the destruction and rebuilding of personal life, and the power of breaking free from the things that bind us. The Columbia Tribune spoke about the tune as containing “soulful guitar stabs and a swirling horn section.” Performing with Kit Hamon, Karl Eggers, and JJ Hamon, Bombara’s lyrics are is urgent, but so timeless. The video is a perfectly constructed accompaniment that shares the uplifting vibe of the song, complete with desaturated and deconstructed shots around the performance space which they occupy.

Once again filmed and directed by Wilkins, “Long Dark Hallelujah” puts Bombara’s newest album Raise Your Flag on display. Presenting viewers with a somewhat unsettling uncertainty, she helps us confront our sins in the best sort of way. Calm, yet quirky, Bombara puts all her cards on the table in this clip alongside bass, fiddle, and zither player Kit Hamon. “Long Dark Hallelujah” is an ode to strong and inquiring lyrics and innovative instruments.

Beth Bombara invites us to join in the dark and damp corners of the mind with these two exciting new video clips, and we’re here to make sure you have everything you need to get these videos into your programming. Contact Andy Gesner and the HIP Video Promo crew at (732)-613-1779 or email us at info@HIPVideoPromo.com . You can also visit www.BethBombara.com/ for more info.