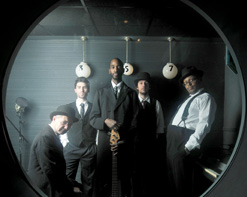 Greetings programmers! It’s Andy Gesner and the HIP Video crew, delivering the future of funk in the form of three totally marvelous videos from Bibi Tanga & The Selenites, a group of Parisian groove theorists ready to take the globe with their stunningly original new sound. Bibi Tange & The Selenites create a space where Afro-futurism meets steampunk, Fela Kuti jams with Sidney Bechet and Marcel Duchamp gets down to Chic.

Though they’ve already made a stir in France, the group now teams up with Nat Geo Music to bring their fashion-forward funk vision to audiences worldwide. We are absolutely thrilled to bring you “Be Africa” and “It’s the Earth that Moves” to show off the diverse sound found on Dunya, the full-length international debut from Bibi Tanga & The Selenites. Dunya takes its name from the word for “existence” in Sango, the language of the Central African Republic, and the album is both a vivid snapshot of the present moment in global music and a roadmap to the future. Deftly juggling English, French and Sango lyrics, singer and group leader Bibi Tanga embeds hyper-literate, socially conscious messages about immigration, malnutrition, AIDS, slavery and more in some of the most danceable grooves this side of Gnarls Barkley. The album is produced by the French sonic mastermind le Professeur Inlassable, the groups resident producer and DJ.

“Be Africa” is the leading single from the album, employing an absolutely modern take on the whole idea what funk should be. Bibi’s bass line drives the catchy pop funk tune as he croons in and out of falsetto, with all the lyrics written in Sango. This slice of Afrobeat-futurism invokes spiritual gatekeepers of deep, ancient rhythmic and melodic treasure in a way that is as admirable to the elitist music community as it is completely accessible the casual listener. The video element of this song essentially helps the viewer become Africa through its majestic visual techniques. Set in a completely black room, the clip is assembled and disassembled by its inhabitants, dressed fully in black camouflaged outfits. The hidden residents dress and undress a number of overlapping Bibi Tangas that are digitally combined into patterns representing various living African tribal masks, which Bibi then wears! If this description is a bit tough to follow, it is only so because this gorgeous construction begs to be seen and not described. Any viewer will be completely ensconced in the first ten seconds.

The second of the Dunya clips is the equally charming “It’s The Earth That Moves,” which is in English and will make you want to break out your dance moves, even if you don’t think you’ve got any. The Jamiroquai feel and the power of what funk is all about is the main attraction of this tune. Funk is supposed to make you feel the music physically, and we dare you to not tap your feet to this one… it’s impossible, we tried! In fact, this is the theme of the “It’s The Earth That Moves” music video. Bibi Tanga & The Selenites are inside a storefront display jamming out, while the passerby’s join in synchronized dance as they reach listening distance. However, one of the coolest and most interesting aspects to this video is that across the street from the band’s performance sits a man who isn’t hypnotized by the song and who suspiciously looks like Bob Dylan! As the song progresses, even he joins to nod his head.

The third video is Bibi Tanga & le Professeur Inlassable in a duo collaboration titled “Au Fil Du Temps” from the Bibi recordYellow Gauze. The song is entirely in French and shows off a more acoustic and tribal spirit of Tanga. The song is laced looping acoustic guitars intermixed with thumping drums and other crafty percussion, featuring an equally crafty clip. The video portion of the song features an array of bizarre animations that set the mood for this unique entry.

You will soon see why major global outlets like BBC are raving about Bibi Tanga with a single glimpse at these precious offerings. Big thanks to the folks at Nat Geo Music for hooking us up with this deserving artist for your consumption. If you need more info, call Andy Gesner at 732-613-1779 or e-mail us at info@HIPVideoPromo.com.