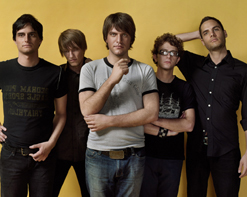 Summer salutations to all of my cherished video programmers! It’s Andy Gesner and the staff from HIP Video Promo, partnering with our friends at Atlantic Records to bring you the latest clip from a group of rising stars. Big City Rock is an appropriately-named quartet. The music made by this Los Angeles combo shares many of the virtues of the major metropolitan areas: excitement, sophistication, drive, sweep, and undeniably infectious electricity. Although they’re a relatively new band, they’ve already shared stages with some of the nation’s most popular rock groups – and later this summer, they’ll be taking their place alongside October Fall and Needtobreathe on the nationwide Love and Heat Tour.

Back home in SoCal, the Big City Rock has been spotted on stages with Rooney and Phantom Planet – and they’ve been right at home with those two established power pop acts. Like Phantom Planet, Big City Rock is decidedly Californian, leading with their melodies and crafting brass-knuckled, muscular songs. And like Rooney, they love pairing vintage analog synthesizer with distorted rhythm guitar. On their three independently-released EPs, guitarist Andy Barr and synth player Frank Staniszewski traded riffs and hooks and pushed each other to excel; now, on Big City Rock, they’ve both emerged as stars. Producers Brian Malouf and Adam Schlesinger (best known as one of the two principals in Fountains Of Wayne) have polished the mixes, brightened the lead synthesizers and toughened the rhythm section – and captured the radio-friendly, arena-ready sound of Big City Rock’s live shows.

To our ears, “All Of The Above” sounds like a huge summertime hit. It’s got an instantly memorable chorus, a gigantic hooky memory, and a synthesizer ride that spins like a Tilt-A-Whirl. As a hedonist’s anthem, it’s currently got no equal on commercial radio – frontman Nate Bott sings about his anticipation of action to come, his excitement is palpable. When Stephen Thomas Erlewine of the AllMusicGuide raved that “Big City Rock is something that is rare in the ’80s-fixated modern rock of the mid-2000s – it’s pure, unabashed fun”, it’s “All Of The Above” that he was talking about.

The clip for the Big City Rock single is every bit as kinetic as the song. As the band plays in a warehouse, the camera slashes from face to face and instrument to instrument. Staniszewski, in particular, gives a dynamic performance, sliding from Nord to Korg with the presence and poise of Greg Hawkes. Fluorescent lights overhead appear like cracks in the ceiling, and dash across the top of the frames. Big City Rock has their electronic recording equipment set up, and the window on the laptop pulses and vibrates along with the song. Soon, accompanied by rapid computer activity, there’s a transformation in the wall facing the band. Sixteen squares appear in the concrete, and begin to shiver and slide outward. At first, it looks like a gigantic, berserk filing cabinet – but before long, the rectangular sliders are crashing toward Barr, reaching out to touch the band. The song is so infectious that the stone itself is set dancing.

Our good friends Diane Van Horn and Jason Pleskow at Atlantic Records continue to bring us tremendous new music, in fact Atlantic has been on such an incredible roll the last year that they have become the major label that others aspire to. We are psyched to be working together with them on this new clip and assure you we will be here for all your Big City Rock programming needs. You will be able to catch Big City Rock on the Love and Heat Tour this summer, so let us know if you would like to set up video interviews when they come to your town. If you would like copies of Big City Rock for on-air giveaways, let us know. We will have plenty of copies on hand. If you need more info, call Andy Gesner at 732-613-1779 or e-mail us at info@HIPVideoPromo.com.