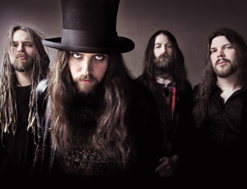 Greetings rockers! It’s Andy Gesner and the staff from HIP Video Promo, hoping you had a spectacular beginning to summer 2008 and a fantastic weekend. Today, we’re proud to bring you something explosive, pyrotechnic, and suitable to the summer blockbuster season: the music of the mind-blowing Bigelf, a pop-prog-Seventies metal-anthemic rock quartet with a sound like a fireworks display. The band is already a popular attraction in Europe, and the stunning Cheat The Gallows is bound to establish the Elf here on their home continent. They’ve already got themselves one high-profile American fan – Alicia Keys, a discerning judge of talent and an adventurous listener, praised the hard rock band in O Magazine.

After watching the amazing video for “Money, It’s Pure Evil”, it’s not hard to figure out why a first-rate piano player like Alicia Keys would respect the Elf. Lead singer Damon Fox is one of the true Hammond Organ titans of our time, often playing mellotrons as he sings. The rest of the group is comparably over-the-top: they’re all astonishing, risk-taking musicians, and on Cheat The Gallows, their ambition is matched only by the grandeur of their sound. But none of this is virtuosity for its own sake – all of Bigelf’s flash, instrumental skill, and showmanship is invariably put to the service of their melodic and tremendously hooky songs. If this all sounds a bit like Queen or Led Zeppelin to you, well, that’s intentional: it’s Bigelf’s stated mission to bring high-impact, high-energy, high-concept rock and roll to mainstream radio.

With top hats and long beards, the members of Bigelf look the part of classic-rock revivalists. Those who’ve seen the quartet in concert and come back to tell the tale have reported visions, hallucinations, impossible sonic overload, speakers and minds blown, and a dramatic, kinetic stage show that puts most contemporary rock performers to shame. Hex, their 2003 album, earned the band a devoted cult following in Europe; the Custard Records re-release has whetted stateside appetites for the upcoming Cheat The Gallows. If, as we anticipate, 2008 turns out to be the year of the Elf, remember: you heard it here first.

The crisply-shot video for “Money, It’s Pure Evil” is as every bit arty as you’d expect – there’s even a weird and slightly creepy breakdown section in the middle where the song stops for a moment – but it tells a familiar story. We watch two attractive young girls roll through the desert in a convertible; they’re clearly good friends, and they’re on their way to Hollywood. Once there, they’re seduced by the suits behind the mixing boards – although it’s Damon Fox who plays the devil in their ears, cajoling them to sign the long, scroll-like contract with a feather-pen. One does and the other doesn’t – and from then on, we follow the story of the new celebrity, watching her descent into madness, incoherence and self-parody. There are hints of dark magic and mysticism in the deal (aren’t there always?), and the periodic screen-freezes create an odd and destabilizing effect. It’s twisted, evocative, and maybe a little seedy, and as it unfolds, the members of Bigelf howling away on the red carpet, lined with dollar signs, twin mellotrons blazing.

It is always a pleasure to be working with Mark Gracious and the fine folks at Custard on another stellar project. We are also psyched to report that the label has been kind enough to endow us with a supply of Cheat The Gallows for all your on-air giveaway needs; so don’t hesitate to get in touch! If you need more info, call Andy Gesner at 732-613-1779 or e-mail us at info@HIPVideoPromo.com. You can also visit www.CustardRecords.com or www.Bigelf.com to find out more about Bigelf.