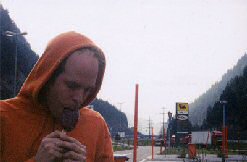 Greetings to all my friends in the music video world. It’s Andy Gesner and the staff from Hip Video Promo. A few months ago, we were lucky enough to be tapped by Drag City to bring you “Agnes, Queen Of Sorrow”, the first clip from the latest Bonnie “Prince” Billy album. That video proved to be a favorite among alternative programmers, and now we’re back with an encore!

If you’ve been following Will Oldham’s music for the past decade, you might recognize “Horses” from the Lost Blues & Other Songs album. In its Palace version, the track was stark, raw, enervating, wide and sweeping as a well-traveled dirt road, defiantly lo-fi. As with the other songs on Bonnie “Prince” Billy Sings Greatest Palace Music, Oldham has reinterpreted “Horses” considerably. Many of the best session musicians in Nashville contributed to the collection, and the album has been given production that is consonant and clear, if never exactly glossy. Greatest Palace Music presents Bonnie “Prince” Billy as a traditional, classic country & western writer and interpreter, and his songs and performances live up to the high standards of the Music City without sacrificing an ounce of their idiosyncrasy or bleakness

“Horses” isn’t an Oldham composition. It’s an old song by Sally Timms, rescued by Bonnie “Prince” Billy from the unfairly-forgotten 1988 Drifting Cowgirls album Someone’s Rocking My Boat. It’s easy to see why Timms’s work might appeal to Oldham – like Bonnie “Prince” Billy, the former Mekon was drawn to country music because of its desperation and defiance, but was always too worldly to embrace it fully. “Horses” beckons toward escape, while acknowledging that the open road might be difficult to find these days. “By day and night the world keeps turning/frightened people hiding in their homes”. The singer can smell the campfires and imagine the galloping of horses. But it’s the straws they’re drawing in the courtroom that will determine the narrator’s future.

The “Horses” clip communicates some of the lure of the highway – all while tacitly acknowledging the limitations of the freedom it confers on its riders. Where the “Agnes, Queen Of Sorrow” video was a minimalist, black-and-white animation, the “Horses” clip is shot in full color: footage taken from the front cabin of a truck, the lines of the freeway as seen by a semi driver. Remarkably, the reclusive Oldham is the featured performer in the video, but as always, there’s some extra mediation between “Prince” Billy and the viewer: his image is projected on a screen that stands in what appears to be a parking lot or interstate rest stop. It’s night, but the footage of the singing Oldham is shot during the daytime. It’s a blast of sunshine and warmth in a blacktop landscape, a keyhole in the evening.

It’s also a kind of confinement. Oldham croons, doffs his cap, shakes, maybe even dances a little (!), but he can’t shake or escape the narrow boundaries of his frame. Later, he reappears in a trucker’s television set, but even there, he’s small, flailing, trapped. Meanwhile, lined eighteen-wheelers pull out of sequence, a wolfhound runs along the tarmac. Even here, the camera catches claustrophobia and constraint: the truck cabin appears cramped, and the dog remains on its leash, or sitting obediently on the floor of the passenger’s seat. Thus symbols of wild release are contrasted with those of restraint: and such it is in Oldham’s country, where the open road is only the distance between closed doors.

We’re very excited to be able to continue working with Melissa Severin and the Drag City team in bringing you the next chapter in the Bonnie “Prince” Billy musical saga. We’ve got Greatest Palace Music CDs and other goodies and we’re ready to meet all of your needs. If you need more info call Andy Gesner at 732-613-1779, or email info@HIPVideoPromo.com. You can also visit Drag City for more info on Bonnie “Prince” Billy, Joanna Newsom and all of their other cool bands and artists.