Bird York “In The Deep” 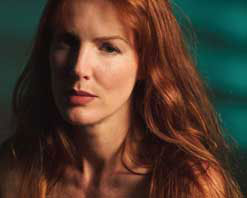 Hello to all my good friends in the music video community! It’s Andy Gesner and the staff at HIP Video Promo with Greetings from Andy Gesner and the whole gang here at HIP Video Promo! I have arrived home safely from my HIP Video Promo Tour 2006 and I’m pleased to announce that a steady stream of terrific new videos will be coming to you unabated this spring! Chances are, even if you don’t think you know Bird York, you’ve heard her sing. It’s York’s voice that sets the final minutes of the Academy Award-winning Crash alight. If you’ve seen the film, you know it’s a work of astonishing emotional intensity: raw, explosive, and confrontational. “In The Deep” serves as a perfect counterpoint to the movie’s devastating conclusion – it’s at once soothing and mysterious, and hinting at something dark and fathomless. York’s voice is serene but pained; the “deep” she sings about is populated by specters and filled with unanswerable questions. As Paul Haggis’ camera swirls above a hostile and fragmented Los Angeles, York seems to channel all the desperation and bewilderment of the characters. It’s no wonder that so many viewers of 2005’s Best Picture left the theatre determined to seek out the song.

York and co-writer Michael Becker were nominated for an Oscar for “In The Deep”, and knocked the crowd dead with a breathtaking performance of the song at the Academy Awards last month. Her music has been featured in F/X, House, and Everwood, and she’s recently inked a development deal for screenwriting with John Wells Productions. In addition to her budding music career, York is a highly accomplished studio actress. Her regal face became familiar to millions of viewers during her recurring role as Congresswoman Andrea Wyatt on The West Wing, and she’s appeared in episodes of Curb Your Enthusiasm, and in several television movies. She stars opposite Anne Heche and Eric Roberts in Fatal Desire, airing now on Lifetime.

But it’s Bird York’s brief turn in Crash and her brilliant summation of the film’s complexity in the song “In The Deep” that have undoubtedly raised her profile, and brought her to the brink of genuine musical stardom. The song fits in perfectly on her major label debut, the appropriately-titled Wicked Little High. It’s a narcotic record; all sultry post-trip-hop grooves and hushed vocals, confessional storytelling, and quiet flirtations with danger and the unknown. Larry Klein, best known for his groundbreaking work with Joni Mitchell and Shawn Colvin, produces Wicked Little High with an emphasis on the hypnotic, allowing York’s voice to wash over the listener like a gentle, insistent tide.

Today, we’re sending you two different cuts of Mark Girard’s clip for “In The Deep”. The first of the two intersperses footage from Crash between shots of York performing the song – here, it’s easy to see how the song heightens and broadens the emotional intensity of the award-winning film. York sounds like an angelic commentator – drifting above the scenes of conflict, softening their harsh intensity, coaxing out the deep sadness animating the dissention. But York is such a dynamic performer (and such a magnet for the camera) that you might be more inclined to watch a version of “In The Deep” with the images from Haggis’s movie removed. In the second cut, Girard allows his camera to linger on York’s radiant face as she sings, frequently pulling back the lens and running the film in an aching slo-mo. In one memorable sequence, her swinging red-gold hair cascades in such a hypnotic pattern that it nearly looks hand-animated. Here, Girard and York prove that while Crash and “In The Deep” make a resonant combination, you don’t need to watch the movie to get the full impact of this remarkable song.

Here at HIP HQ, we are so happy to be working once again with Bruce Sullivan, Jill Weindorf and all of the fine folks at Narada to bring you these two clips from such an undeniable talent! We have plenty of copies of Wicked Little High to satiate all of your Bird York needs. She will be touring later this year, so if you would like to set up a video interview with Bird York when she visits your market, please don’t hesitate to get in touch. If you need more info call Andy Gesner at 732-613-1779, or email info@HIPVideoPromo.com .