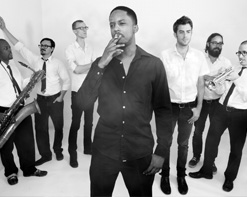 Hello programming brethren, it’s Andy Gesner and the HIP staff here with a brand new clip from our favorite soulful bluesy rock n’ roll group – Black Joe Lewis and The Honeybears. The electric and mystifying genre benders return to glory with their gritty and sultry new single “Livin’ In The Jungle” from the band’s second full length albumScandalous.

All killer, no filler, the fittingly titled, take-no-prisoners Scandalous, out on Lost Highway records, once again produced by Jim Eno, moonlighting from his main gig as Spoon’s drummer—is a churning slab of rock & roll, blues and funk, laced with a double shot of 100-proof punkitude. The funky fantasia “Livin’ in the Jungle” is singer Joe wailing with tonsil-shredding abandon over a rhythm section erupting like a tropical storm and horns honking like hyenas in heat. The track has it all: Delta and Chicago blues, Memphis soul, and Detroit garage punk all in one. For a rock and roller the guitars are loud, dirty and warm. For a soul fan, the horns and funk are all there too. The track is an innovation to the genre, while sticking to an old school, tried and true formula of blood, sweat, and bitter tears.

This sort of honest effort does not go unnoticed. SPIN has given the record a top tier review, calling Scandalous “gloriously hedonistic” where the band make no common mistakes as “Lewis and Co. avoid sounding either self-consciously retro or awkwardly modern.” Filter also concurs, calling it “distilled goodness” and “groovy in the most literal sense of the word.” Esquire has named Black Joe Lewis and The Honeybears as one of their “Ten Bands Set to Break Out at 2009’s SXSW Festival” and the prophecy seems to be coming true. In just the first few days after the “Livin’ In The Jungle” video was released on VEVO, the clip garnered a massive 75,000 views. Joe Lewis and the gang have recently opened up for some major national touring acts including Spoon, Okkervil River, and The New York Dolls, as well as made appearances at Lollapalooza and the Austin City Limits Music Festival. The band is currently hard at tour with Sharon Jones and the Dap-Kings across the United States, so be sure to reach out for a chance to see them in person or for interview opportunities.

The video for “Livin’ In The Jungle” captures the sexy, wild, carefree attitude of the song, as the clip was filmed in the capital of sin, Las Vegas, Nevada. The band visited the desert oasis for a total of five days to film the clip. The entire stint is shot in gorgeous black and white, sharp as nails, with crispy vintage overlays. This video is mainly performance in a very cool setting, taking place within one of the glamorous demonic casino towers. However, the live-style slices are broken with clips of the band walking the desert and visiting some of other Vegas locales. This stylish work of music cinema radiates with cool and will make you wish you were half as cool as these guys are.

It’s an honor for us to represent this awesome Lost Highway video from the innovators and benders of several genres, Black Joe Lewis and The Honeybears. Join us in playing this superb video, which is a piece of fantastic cinema, as it is an outstanding droplet of rock and roll. If you need more info, call Andy Gesner at 732-613-1779 or e-mail us at info@HIPVideoPromo.com. You can also visit www.LostHighwayRecords.com or www.BlackJoeLewis.com to find out more about Black Joe Lewis and The Honeybears.