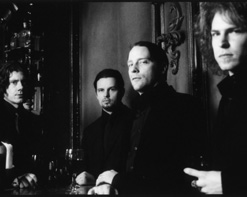 A warm and rocking hello to all my music video programming friends! It’s Andy Gesner and the staff from HIP Video Promo, back with a brand new video from a familiar face. Not everybody loved Limp Bizkit – although enough did to make the band one of the most popular groups in the world during the late Nineties. But even the group’s detractors had to admit that there was something special – and uncommonly innovative – about guitarist Wes Borland. His unusual chord voicings, surprising choice of instruments (he famously used a baritone guitar on “Nookie”, deepening and thickening the sound of the six-string assault) and outrageous stage appearance lent the band much of its character and most of its unconventionality. Since parting ways with Limp Bizkit back in 2004, Borland has continued to follow a personal muse, experimenting with sound and tone and penning songs of great intensity and unflinching honesty. Anticipation has built for his first major post-Bizkit project and album release – and now that it’s here, we’re pleased to report that Black Light Burns is an absolute monster.

Borland hasn’t gone it alone. The inventive guitarist has called in a team of hard rock heavyweights to help him realize his vision. Danny Lohner of Nine Inch Nails, Skrew and Marilyn Manson produced Cruel Melody, and he brought his bass, his six-string, and his Goth-industrial sensibility to the project. Drummer Josh Freese – also a veteran of NIN – has pounded the skins on countless albums, including those by A Perfect Circle, DEVO, Rob Zombie, and Ween. Sonic landscaper and synthesizer player Josh Eustis is best known for his work with IDM pioneers Telefon Tel Aviv and his incendiary remixes of heavy rock songs. Singer-songwriters Johnette Napolitano and Carina Round contribute support vocals, and even Bizkit bassist Sam Rivers makes an appearance. Together, these seasoned musicians have crafted a debut that transcends the stylistic conventions associated with hard rock, and incorporates elements of Goth, hardcore punk, industrial metal, and electronic music.

“Lie”, the lead single from Cruel Melody, is pure modern rock – an explosive burst of distortion and rage, and a declaration of independence and self-affirmation set to a thunderous backbeat. Wes Borland, it turns out, is a commanding presence on the microphone as well as a wizard on the fretboard, and his vocals are brutal, menacing, and certain. The song is a kiss-off to former colleagues and a statement of renewed purpose; the narrator might be “living a lie” that threatens to deaden his soul, but he’s determined to fight his way toward the truth and an entirely new way of being. “I follow these pigs around but I never get used to it”, he reflects, “they keep building their feculent franchise”. Names aren’t explicitly named, but it’s not too hard to tell who, and what, he’s singing about.

Borland is well-known for his theatrical and confrontational self-presentations – he’s gone onstage in front of testosterone-soaked audiences dressed as a girl, and his black contact lenses and bizarre makeup became famous in the late Nineties. In the “Lie” clip, the singer-guitarist and director Josh Evans select imagery that is no less jarring. A shirtless Borland approaches two kneeling women, who seize him and smear him with unguent. No matter how roughly they treat him, he continues to spit out the words of his song; it’s a burning complaint, and he’s burning to make his confession to the camera. It soon becomes apparent that he’s in the hands of black priestesses, and they’re preparing him to be ritually sacrificed. Borland is led to a coterie of masked men with knives, and we see the flash of steel and light; later, the body is dragged to a throne, where the corpse revives and presides over a dead man’s party. A parable of escape and rebirth? That’s for you to decide, but one thing is clear – it’s a new day for Wes Borland, and it begins right here.

Huge props and many thanks to Fred Croshal, Jimmy Brunetti, and the whole crew at I AM: WOLFPACK for bringing us on board to promote this incredible new video that we are confident will raise Wes Borland’s status to a new level! We have plenty of copies of Cruel Melody on hand here for all of your on-air giveaway needs, and are prepared to set you up with a video interview when Black Light Burns comes to your area, so drop us a line if you’d like to get in on the action! If you need more info, call Andy Gesner at 732-613-1779 or e-mail us at info@HIPVideoPromo.com. You can also visit www.facebook.com/BlackLightBurnsOfficial to find out more about Black Light Burns.