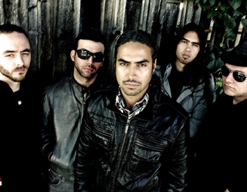 Greetings music fan! It’s Andy Gesner and the staff from HIP Video Promo, back with an attention-getting clip from a terrific new band. It’s one of the many fringe benefits of playing music in Los Angeles: if you’re good enough, you’re virtually guaranteed to pick up some famous friends. If you’re really lucky (or just really talented), some of those friends might even be models. Now, Blackcowboy is a telegenic group – but we don’t think they’ll take it as an insult when we point out that their guest star steals their video. Get the world-famous Gisele Bündchen to appear in your clip, and you’re guaranteed to turn heads.

Bündchen’s turn is no cameo. The supermodel is all over the “Come On” clip – in store windows, beaming back from bus-side advertisements, and walking in slo-mo down Melrose Boulevard. She’s the object of singer Jonah Johnson’s obsession – and from his seat at a sleepy Hollywood bus stop, he sees her wherever he looks. She’s just a fantasy (or perhaps a memory), but she’s a persistent one. And Bündchen, we’re pleased to say, plays the role to the hilt, radiating glamour, sex appeal, inner confidence, and an appealing indifference to Johnson’s emotional demands. She’s unobtainable and that’s the point.

So how did an indie singer from California land a video-date with one of the world’s most recognized women? Although Johnson and Blackcowboy play unrequited lovers in the “Come On” clip, truth is, they’re very much in demand. Not only are they major club attractions in Southern California, but they’re also Los Angeles Music Award nominees. They’ve been in heavy rotation on local independent radio, and they’ve made the download charts on garageband.com and other popular websites. Their lush, cinematic sound – one frequently compared to Coldplay and Songs About Jane-era Maroon 5 – has won Blackcowboy the respect of the film community. Last year, Leonardo DiCaprio used two of the band’s songs to score the first movie released by his production company: the black comedy Gardener Of Eden.

Gardener director Kevin Connolly is surely best known for his work on Entourage. But he’s an enormous music fan, too, and his video for “Come On” is a classic slice of sun-baked Southern California rock ‘n’ roll fantasy. Connolly deploys Gisele Bündchen for maximum impact, and each time she appears, she’s scalding enough to burn a hole in the celluloid. But Jonah Johnson’s own performance is utterly convincing, too: he hardly leaves the bus stop bench, but he’s still able to communicate great lovelorn intensity. When Bündchen arrives and sits next to him, he sings to her passionately – and yet the viewer (and maybe the singer) knows she’s an illusion generated by his own reverie. A bus rolls by and obstructs our view, and once it’s gone, she’s gone, too. Throughout, Connolly demonstrates his creativity and attention to detail: as gorgeous as Bündchen is, some of the video’s most expressive moments are its quietest. Repeat viewings uncover the old-fashioned beauty of the Melrose streetscape, and the reflection of the trees in the plate-glass windows. See, there are other things to stare at in the “Come On” besides Bündchen. Honest! Oh, who are we kidding? Try not to ogle too much.

It is our greatest pleasure to be working in close tandem with Eustace Hicks and the Blackcowboy team to champion this up-and-coming musical tsunami, bringing “Come On” to the masses! If you need more info, call Andy Gesner at 732-613-1779 or e-mail us at info@HIPVideoPromo.com. You can also visit Reverb Nation to find out more about Blackcowboy.