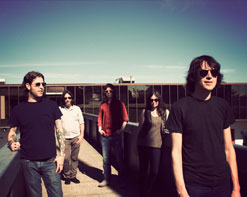 Greetings, dear programmers! It’s Andy Gesner with the HIP Video Promo staff bringing to you a video that you can sink your teeth into that is every bit as psychedelic as the band themselves. You’ve had a fair share of the eighties courtesy of Goldfrapp, but here’s Black Mountain taking it back to the seventies for you with their video for “Old Fangs.”

Directed by Mike Bruce, the seventies feel of Black Mountain’s “Old Fangs” is quite prevalent from the colorful pinwheel effects scattered throughout and right down to how the video is framed with rounded edges. Visually, it’s a nod to a favored genre that also blatantly inspires this Canadian rock band.

The story behind the video is a sight to be seen as well. Lead vocalist and guitarist Stephen McBean plays the main character in the “Old Fangs” video and takes a roadtrip not to be forgotten – that is, if he can even remember it. This particular trip (and we mean that quite literally as McBean seems to be hallucinating through half of it) is filled with mystical orbs, an ominous spirited owl, an unsuspecting girl in dressed in white, a hotel room decorated with skulls and candles, and three witch-like women seemingly haunting him. Toward the end, McBean is seen getting dragged into the woods and joining in on a ritual in which he is not aware that he is partaking. It almost feels like you as the viewer have been put under a spell as well as McBean repeats, “Bow once straight laced forever” over and over.

“Old Fangs” is the kind of video that Black Mountain can pull off simply without a hitch. In fact, online music giants NME.com,Pitchfork.com and # have featured the video and all expressed their eagerness for Black Mountain’s third album, Wilderness Heart in which “Old Fangs” is the lead single. Due out on Sept. 14, the album is the hotly anticipated follow-up to 2008’s In The Future, which peaked at No. 101 on Billboard’s 200 chart and No. 1 the Heatseekers Albums chart. You’ll definitely want to pick up a copy when it hits shelves, especially since producers like D. Sardy (who has worked with Nine Inch Nails, LCD Soundsystem and Spoon) and Randall Dunn are the ones working behind it.

Thanks to the folks at Jagjaguwar for bringing this Black Mountain clip to us. We’re certain you and your viewers will enjoy this video as much as we have. We’d love to hook you up with some copies of Wilderness Heart, so please be in touch if you’d like to get your hands on some copies. If you need more info, call Andy Gesner at 732-613-1779 or e-mail us at info@HIPVideoPromo.com. You can also visit www.blackmountainarmy.com and www.Jagjaguwar.com to get more info on Black Mountain.