The Blackouts “Let You Down” 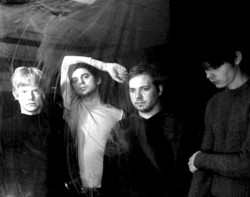 Greetings to all my programming pals!, It’s Andy Gesner and the staff from HIP Video Promo, here with another stylish video from an emerging indie band. Think New York City and Detroit have cornered the market on chic, high-quality garage-revival music? These days, great, edgy guitar rock is howling out of basements all over the American Midwest. The Blackouts, for instance, are the pride of Champaign, Illinois, and regular attractions at The Highdive, the college town’s first-rate performance venue. But they’ve fashioned a sound – twin sandpaper six-strings, thick, aggressive bass, off-kilter beats, and Steve Ucherek’s sneering vocals – that would be at home anywhere.

Their undeniable songwriting acumen helps, as does their willingness to take chances. The band draws equally from classic 70s art-punk and Nuggets-collection heartland garage rock (and there’s even some recent Britpop thrown in there, too), and synthesizes their influences with adventurousness and skill. Outsiders have begun to notice:Alternative Press named The Blackouts a “band to know” for 2005. More impressively, the group won Little Steven’s Underground Battle Of The Bands – a contest that drew thousands of entries from all over the country. The Blackouts were the consensus winner of the Chicago regional contest, and then flew to Irving Plaza in New York to wow the judges and take the grand prize at the sold-out finals.

“Let You Down” is a typical Blackouts cut: melodic, nihilistic, menacing, unpredictable. The song is built around a drum part that sounds perpetually like it’s about to capsize – but it never does. Instead, it keeps the listener off-balance, ungrounded, susceptible to Ucherek’s disturbing fatalism. The Blackouts singer adapts a blasé cool in the face of death; a bit out of breath from his chase with the reaper, but defiantly unafraid.

The main character of the “Let You Down” video may be similarly fearless, but she’s not quite as lucky. Directed by Bradley Scott, it’s a guided tour through the wet, deserted streets of late-night Chicago. His camera follows a young bicyclist headed for a fatal appointment with a sinister sedan. In case we’re harboring any romantic delusions that she’s going to make it through the song alive, Scott opens his clip with a shot of the girl immobilized on the tarmac, her bicycle sprawled beside her. From there, he cuts back to shots of her riding blithely through the streets, swerving through the middle of the road, pedaling across motor bridges, and stopping at lampposts to inspect Blackouts fliers. Just as the band’s rhythm section destabilizes and disquiets the listener, Scott’s video keeps the viewer uneasy, restless, conscious of impending danger.

Threats lurk in every shadow, and are present in every frame. We see the approaching car, but not the driver: instead, we’re shown the plastic skull hanging above the dashboard. As the auto speeds on, the little death-head appears to be bobbing in a similar rhythm to the bicyclists’, and to the people in crowd gathered to hear The Blackouts play. They’re set up in an abandoned building; drenched in sweat, white stage light pouring out from behind them, the Blackouts attack their instruments with penitential fervor. Not Ucherek, though – nosed pressed against the mesh bulb, eyes partially closed, he addresses the microphone with an unsettling nonchalance.

The Blackouts will be taking their high energy act on the road in the near future, which means they’ll be available for video interviews or video IDs. We also have a large stash of CDs for on air giveaways. If you need more info, call Andy Gesner at (732) 613-1779, or email info@HIPVideoPromo.com. You can also visit www.bifocalmedia.com and www.lucidrecords.net for more info!