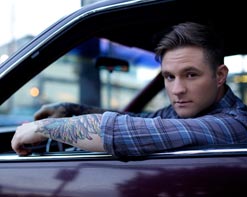 Even when he was a popular contestant on the sixth season of American Idol, Blake Lewis never seemed like a typical participant in a TV talent search. It’s not that he didn’t belong: his second-place finish demonstrated that he could out-sing nearly everybody on the pop charts. It’s that his interests always seemed broader, his musical knowledge deeper, and his sense of humor sharper and more self-deprecating than primetime television usually bothers to accommodate. In short, while most Idol contestants feel like works in progress, Lewis felt like a fully-formed and multidimensional artist.

His post-Idol career has reinforced that first impression. Lewis has worked with mainstream hitmakers like Ryan Tedder and S*A*M & Sluggo — but also adventurous underground hip-hop artists Common Market and trance deejay Darude. Portrait of a Chameleon, his latest album, is a testament to his breadth: on it, Lewis draws from funk, jazz, rap, throwback electropop, and even a bit of pop-metal. This is a singer who refuses to limit himself. He goes wherever his talent brings him. And although America already knows how good he is, he makes sure never to take himself too seriously.

“Retro Romance,” the new single, extends Lewis’s fascination with the sound and the iconography of the ’80s. Lewis, who collaborated with Darude on a cover version of A Flock of Seagulls’s classic “I Ran,” stops at nothing to ensure that the track has the shimmer and sparkle characteristic of the hits from the day-glo decade. Lewis and director Nick Pezzillo (an experienced filmmaker who has also shot memorable clips for the Arctic Monkeys, Willy Moon, and Portugal. The Man) have given “Romance” a video that perfectly matches its neon-bright sound and its delightful silliness.

Just like the song, the clip plunges the viewer into a nostalgic reverie. Lewis takes the part of a worker at a toy store crammed with ’80s memorabilia: video games, replica props from movies, comic books, toy robots. Soon he’s daydreaming about the era — and he plays the role to the hilt, dancing like George Michael and posing like Max Headroom on an old television monitor. There are playful nods to Say Anything, John Hughes movies and period superhero epics, a lovably goofy romance worthy of early MTV, and a climactic plastic lightsaber battle with a rival (wearing a varsity letter, of course) for the girl’s affections. There’s even a cameo appearance by Dennis Haskins — better known as Mr. Belding, the lone grownup on Saved By The Bell. Blake Lewis clearly knows his ’80s as well as the original veejays did, and his enthusiasm for popular culture is infectious.

It’s always a pleasure to work with such accomplished and compelling artists such as Blake Lewis and we would absolutely love hook you up with anything you may need to get this fabulous new “Retro Romance” video into your programming. For more information please contact Andy Gesner and the HIP Video Promo staff at (732)-613-1779 or email us at info@HIPVideoPromo.com .