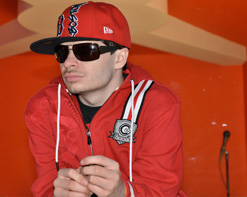 Greetings programmers! It’s Andy Gesner and the HIP Video staff, here with a hip hop track from a rising music star that has beat so many odds up against him that he could bankrupt a casino. Blind Fury represents the evolution of the rap game that was born on the streets of the Bronx with every fiber of his being. A man who is never shy of words, this fearless rapper expresses exactly what is on his mind in his new single “Friends Before Lovers.”

Born blind, his mother was told he wouldn’t live to breathe past age one. However, not only has Blind Fury survived his physical obstacles, but beat out many competitors in the rap game, still fighting the fight strongly. Blind Fury is best known on the national scene for his 2003 appearance on the live MC battle on MTV and most recently for gaining the coveted number one spot on BET’s 106 & Park“Freestyle Friday” MC battle segment. Blind Fury is not only an excellent rapper, but has been actively singing and playing the keys. This sort of talent has garnered support from industry artists such as Killer Mike,T.I., KaySlay, D.J. Premier, Ghostface, Ludacris, FatMan Scoop, Gregg Street and Big Gipp. After winning the BET competition, Blind Fury also released the hotly anticipated “Fury Friday” Mixtape to positive reviews across the board.

“Friends Before Lovers,” the leading track from the record Young And Gifted Always, combines elements of rap and R&B to form a flawless delivery of a heartfelt story. The song deals with romance that started off as a close friendship, led to a passionate fling, and then dissolved into a bitter ending. It’s a tale of cheating, lying, and other racy affairs that always results in regret and great music! “Friends Before Lovers” is led by a piano riff played by Blind Fury himself and also employs Maurice Smith on vocal ad libs to really drive the point home. The video portion of the clip follows suit with the lyrics and portrays the story as it is presented vocally. This combination allows the viewer to truly connect with the lyrics and experience heartbreak before their eyes. Whether someone is a hip hop fan or not, they will most definitely connect with the messages in the song and relate them to their own life.

We are thrilled to bring you this much deserving artist who has turned the lemons his life has served him into a top shelf martini. Blind Fury is currently being featured in genre blogs like Nah Right and MeetThaDealer, and it’s time for you to join in on the action! We urge you to file your requests for interviews and contests to help spread the word about this artist. If you need more info, call Andy Gesner at 732-613-1779 or e-mail us at info@HIPVideoPromo.com. You can also visit facebook to find out more about Blind Fury and upcoming show dates near you.