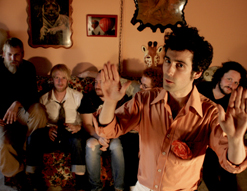 Greetings indie rock lovers! It’s Andy Gesner from HIP Video Promo, here with another intriguing clip from a band on the rise. Think Blitzen Trapper is only an underground favorite? Guess again. Rolling Stone just put the group’s latest LP on their annual list of must-have albums. In the same year-end round-up, “Furr”, the latest single, was named the #4 single of ’08. Network television has taken notice, too – “Furr” scored a romantic scene in a recent episode of NBC’s Chuck. They’ve swept across the nation and opened for The Hold Steady; this winter, they’ll be headlining a national tour of their own. Eric Earley’s sweetly-experimental pop combo seems a likely bet to become that rarest of things: an alternative-music favorite that finds popular success without sacrificing either its original sound or audience.

It’s been a dizzy rise for the Portland sextet. A year ago at this time, few outside of the Pacific Northwest knew about Blitzen Trapper – although they’d established themselves as regional favorites, response to their intriguing and endlessly-replayable early albums was confined to a small group of adventurous listeners. The 2007 release of Wild Mountain Nation changed all of that. Raves poured in – Spin, All-Music Guide, and the mainstream press all crowed about the set – and Blitzen Trapper earned national recognition for their playful fusion of country-folk, lo-fi, Sixties-inspired psychedelia, and sheer inventive pop madness.

Furr, the group’s heralded follow-up, is the fullest realization of Eric Earley’s multifaceted vision. It’s simultaneously sharper, more colorful, and more focused than anything the band has ever recorded; and while it preserves much of the whimsy and basement-studio charm of Wild Mountain Nation, it sounds gorgeous, too. In a review that praises Furr as a thirteen-song set with no filler and Earley as the most convincing “new Dylan” of the decade, Rebecca Raber of Pitchfork raves about the “unexpected flourishes that keep the album crackling with excitement, and separate Blitzen Trapper from the rest of the bands that are trying their hands at a similar throwback sound.” Billboard calls Furr “a perfect fall soundtrack rife with woodsy imagery”, and compares the band to the commercially-ascendant Fleet Foxes.

The title track from Furr is, like many of the band’s songs, poetic, mysterious, and emotionally compelling. It’s the story of a man raised by wolves who, seduced by a girl and a normal life, still longs for the forest. He trades his fur for skin, but can’t get the wilderness out of his heart. Director Jade Harris could have chosen to literalize the story in his video for “Furr”; instead, he’s chosen to enhance and reinforce the strange dreamlike quality of the song. The clip is partially animated: shots of Earley in performance are rendered as charcoal-pencil drawings and superimposed over an image of an open tome. The pages don’t turn, but the picture still moves as if the viewer is rifling through a flip-book. Paper cutouts of wolves and trees are pushed across the sepia-toned backdrop; images multiply and are quickly knocked aside. Much as in Of Montreal’s superb clip for “Suffer For Fashion”, the hands of the animator are frequently shown. This wilderness is constructed; the forest is drawn; and the freedom of the trees and wilds can be approximated, but never fully realized.

We’re thrilled to be starting 2009 so strong thanks to the good folks at Sub Pop Records. Blitzen Trapper will be headed out on a full national tour next month so please check them out when the band is in your area! If you need more info, call Andy Gesner at 732-613-1779 or e-mail us at info@HIPVideoPromo.com. You can also visit www.SubPop.com or www.BlitzenTrapper.netto find out more about Blitzen Trapper.