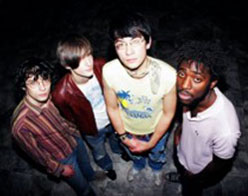 Best wishes to all my programming friends, it’s Andy Gesner and the staff from HIP Video Promo thrilled to announce I have returned home from my HIP Video Promo Tour 2005 and I’m ready to rock! Here at HIP, we see lots of performance clips from intriguing indie bands. Some are stylish, some are kinetic, most are revealing, and almost all of them are enjoyable and characteristic. But we don’t think we’ve ever seen a performance video better realized than “Banquet” by Bloc Party. The clip is perfectly calibrated: a fruitful combination of the live energy of the band, creative camera movement, and artful, stylized shots. It cleverly unites the performers with the audience, and does so without eroding any of the emotional authority of the band’s onstage presence. It announces Bloc Party as a conceptual and visual force to be reckoned with.

No Englishman would be surprised. This London-based four-piece has been impressing the hell out of their countrymen for the past two years – and they’ve barely broken a sweat while doing so. Bloc Party once famously sent a demo to Franz Ferdinand, and made such an impact on the world-famous dance-punks that they were rewarded with a slot at the Domino Tenth Anniversary party. Everywhere they’ve played, they’ve been followed by a fawning UK press corps; their two difficult-to-find EPs have been hailed as brilliant. Echoes of Gang Of Four, The Chameleons UK, the early Bunnymen, and The Fall are discernible in their sound, but this is no copy act: they’ve excited people precisely because they’ve managed to synthesize their influences in such a fresh and seamless manner. With the stateside release of Silent Alarm on Vice Records, Bloc Party is poised to conquer America. This year’s Franz Ferdinand? Set your expectations even higher.

The “Banquet” single doesn’t epitomize the Bloc Party sound, because no one song could – this is the rare young group that’s legitimately protean. Silent Alarm contains moments of post-punk scronk and Head On The Door-era new wave radio music, sociopolitical song-fragments reminiscent of Blur at their most thoughtful, and anthemic pieces that defy description. But the single will give you a pretty good idea of what all the fuss is about. You get: angular, back-and-forth guitars, telegraphic riffs, intelligent hyper-aware lyrics, a butter-smooth chorus, sudden stops, countermelodies, a relentless pile-driver of a bridge, and a chanted outro in which Kele Okereke’s desperate vocals play laser tag with Russell Lissack’s whammied-out lead. .

The clip for “Banquet” shows off Bloc Party’s convincing rock star style – they’ve got the look, the clothes, the haircuts, the casual stance. We see the bandmembers through transparent circles of solid color suspended in the middle of black-and-white frames. They stare out at us through (or over) the colored circles, presented there like models in arty fashion magazines. When the video switches to straight performance footage, it’s strictly black-and-white – but the audience is shown in washes of color, as if seen through a lighting gel.

But it’s the camera technique that really brings the “Banquet” clip to life. It’s an unsettled eye for sure, but it doesn’t move the way an agitated viewer might. Instead, it slides abruptly, like a rook – all straight lines and right angles. It suits the music perfectly – just as the riffs are crisp, angular, and interlocking, the camera-work is comparably geometric. The lens oscillates back and forth on the downbeats, zooming in abruptly during penetrating moments. There’s a sense of restlessness, of constant adjustment, refinement, thoughtful focusing of attention and energy. When the camera sweeps forward to capture the faces of winsome audience members, it zeroes in on its target with the unswerving intensity of an arrow shot from a bow.

Please reach out to us here at HIP if this video and band gets you excited. No band had a bigger buzz at this year’s SXSW than Bloc Party. We’re absolutely thrilled to be working once again with Adam Shore and VICE Recordings to bring you this terrific video. We have plenty of copies of Silent Alarm for on-air giveaways and since this is a band that is a “must-see live” religious experience, we encourage you to get in touch to schedule a video interview when Bloc Party visits your market. If you need more info call Andy Gesner at 732-613-1779, or email info@HIPVideoPromo.com.