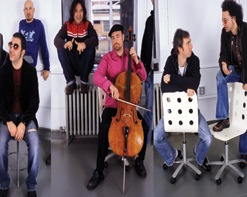 Hello everyone! It’s Andy Gesner and the staff from HIP Video Promo with another great NYC band on the verge of a national breakthrough. For three years now, we in the indie rock community have been berated by well-meaning cultural commentators for our ostensible lack of engagement with current events. With America at war and popular sentiment at home split between those who support the administration and those who abhor it, shouldn’t we be able to turn to our independent poets and artists to sort through the emotional ambivalence and craft powerful statements? Well, Blow Up Hollywood is one indie act that has risen to the challenge. The New York City septet has already made a name for itself with its elaborate soundscapes and conceptually sophisticated independent releases. Now, the group turns its attentions to the Iraq War – and the result is a document of startling depth and power.

The title of The Diaries Of Private Henry Hill is no fiction. The latest Blow Up Hollywood release is based on the actual personal writings and poetry of a soldier killed in action in Iraq. The decision to put Hill’s story to music is at once courageous, generous, and creatively fruitful: by giving the dead soldier a platform for his story, Blow Up Hollywood is able to tell a far more nuanced and personal tale of America at war than what we’re normally exposed to in mainstream media. From his reluctant enlistment to his forced complicity with the unseemly side of military life to his regrettable death, the band animates Hill’s narrative with sensitivity, compassion, and an open mind. Suitably, the album hits store shelves on July 4, 2006.

“WMD”, the lead single, is a particularly poignant diary entry. Here, Hill joins the Army to escape from a dead-end town – terribly unaware of what he’s about to facce in the deserts surrounding Baghdad. His bewilderment and confusion is made palpable by the band, who generate a wide, breathtaking, and disorienting sonic tapestry that Roger Waters might envy. Throughout The Diaries Of Private Henry Hill, Blow Up Hollywood augments their bracing rock with string arrangements; on “WMD”, as elsewhere, the effect is more dizzying than cinematic. This is a band of exceptional musicians for sure, but they’re much more interested in setting a mood than they are in flashing their chops.

Joel Tippie, the director of the “WMD” clip, is well-known around New York City for an underground activist project of his own – he’s the manager oof the nonprofit Housing Works bookstore and cafe. But Tippie is also a respected cartoonist, and it’s his formidable talents with a pen and paintbrush that Blow Up Hollywood are calling upon here. The animated video echoes the narrative in the song: we follow Hill from his trailer in America to the battlefield abroad. The private – and the world around him – are distorted, burdened, visibly distresssed. Tippie has the knack of conveying a sense of heaviness and consequence with just a few penstrokes, and his illustration of the infantryman communicates the crushing gravity of fate.

More telling are the thought bubbles that float above Hill’s head as he tries to riddle through his predicament. He thinks in incomplete equations – adding the World Trade Center to Osama Bin Laden, and balking at the generally-accepted answer. (Searching for the sum of George Bush and Dick Cheney yields a more comical result.) Tippie and Blow Up Hollywood preserve a soldier’s confusion and desperation in lines, music, and bright color, and, in the process, they dignify and honor it without condescension, but with genuine remorse.

We are very excited to be working with our friend Karen Lee and all the folks at Evolution Promotion to bring you this politically charged clip. We will have plenty of copies of The Diaries Of Private Henry Hill, so please don’t hesitate to get in touch if you would like to set up an on-air giveaway, or Blow Up Hollywood contest. If you need more info call Andy Gesner at 732-613-1779, or email HIPVidea@aol.com. You can also visit www.evolutionpromotion.com, www.blowuphollywood.com,www.myspace.com/blowuphollywood, or www.mj12musiclabel.com/blowuphollywoodpress to find out more about Blow Up Hollywood.