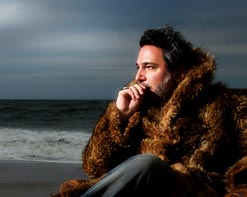 Shape-shifting pop-rock collective Blow Up Hollywood has crafted a complex catalogue over the course of 12 years and 7 critically acclaimed albums, tackling the sounds of Americana, dark wave, freak folk, and post rock among others. But it has all led up to Blue Sky Blond, their most direct and personal album to date. HIP Video Promo is pleased to introduce the dramatic clip for their latest single, “Waiting For My Ship.”

Born out of a difficult and uncertain time in the life of vocalist/guitarist Steve Messina, Blue Sky Blond is an album full of stark, vivid imagery, painting a world that is at once majestic and terrifying, infinite and fragile. That pointed juxtaposition is perfectly captured in the video for “Waiting For My Ship,” where beautiful footage of rocky beaches and ocean skies are contrasted with the silent unraveling of a man alone and lost to the world.

The sound that Blow Up Hollywood delivers on this track, however, is a marvel of duality as well. “Waiting For My Ship” clearly evokes a certain sense of melancholy, communicated by yearning guitar lines, plaintive piano, and Messina’s melody. But this isn’t a dirge by any definition. In fact, from the leading drum fill, the song rides a propulsive wave of captivating mid-tempo mastery that will make you move with the beat – even perhaps as you contemplate deeper, more difficult themes of isolation and sadness.

Despite the existential crisis that Messina used as inspiration for writing Blue Sky Blond, the process of recording this album was transformative. It showed him who his true friends were and turned the loose collective of Blow Up Hollywood into a band. The power and energy behind that is present behind every note.

We’re proud to be working with Blow Up Hollywood again and for the opportunity to share their music with you. For more information on this artist, please contact Andy Gesner and the HIP Video Promo staff at (732)-613-1779 or email us at info@HIPVideoPromo.com . You can also visit www.BlowUpHollywood.com for more info.