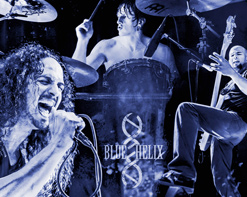 What is the strange netherworld between life and death like? Is it possible to communicate with the ones we love as they are slipping into the next world? If so, what might that person’s experience be? Heady questions all, and impossible to answer — but Blue Helix is bold enough to hazard a few guesses. The gorgeous clip for “Aliens”, the latest single from the Washington State outfit, imagines a glance behind the veil. It’s an ambitious work of speculative fiction from an emerging band that has never been afraid to shake up its audience — or reach for the heavens.

Fans of Blue Helix won’t be surprised by the audacity of the “Aliens” clip. Since the late ’00s, the quartet has been dazzling Pacific Northwestern music listeners with its amalgam of grunge-inspired modern hard rock, thoughtful metal, neo-prog, acoustic folk, and orchestral music. Tale of Two Halves, the band’s acclaimed album, showcases outstanding musicianship, scrupulous attention to sonic and lyrical detail, and front-man Sami Chohfi’s searing lead vocals. Tale of Two Halves is an independent release, but it matches the majesty and grandeur of any big-budget major label recording — and it announces the arrival of a group on the verge of bigger things.

“Aliens” is the melodic centerpiece of the album: a rich, yearning, string-adorned power ballad with a thoughtful message. It’s the sensitive, creative flip-side — and perfect complement — to the pile-driver rockers that kick off the record. And just when you think you’ve got Blue Helix figured out, the quartet follows “Aliens” with an incisive reinterpretation of “Masters of War” that drenches Bob Dylan’s protest classic in violins. It’s a powerful statement of intent from a deep and provocative band that loves to confound its listeners with unexpected twists.

The “Aliens” clip begins with footage of a shirtless man racing through a forest path; we don’t yet know where he’s going or why he’s traveling so quickly, but an aura of vulnerability hovers around him. Soon, he reaches a cliff overlooking the ocean, and as he comes to a moment of clarity we watch him take a leap of faith — he turns his back to the water and releases himself into it. Only then do we realize the truth: he’s clinging to life in a hospital bed, and his journey to the waterside is a metaphor for his encounter with the great beyond. His beloved kneels beside him and, against the odds, finds her way into his reverie. As she breaths life back into her soul mate, they emerge into Nirvana. Together they walk along the beach beneath fantastic skyscapes: enormous planets, nebulas and distant moons, and otherworldly colors streaked across the firmament. While the clip is mesmerizing and beautiful, it also contains a hopeful message — the power of true love transcends space and time.

We’re all incredibly excited to be working with Blue Helix and thrilled to share this musical tsunami’s visual aesthetic with the world. Please get in touch with us and let us know if you’d like to get your hands on a copy of Tale of Two Halves, or if there is anything else we can do on our end to help secure the programming this band and video certainly deserves. Please contact Andy Gesner and the HIP Video Promo team at (732)-613-1779, or email us at info@HIPVideoPromo.com. You can also visit www.BlueHelixMusic.com for more info on Blue Helix.