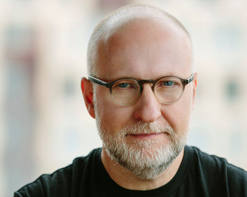 In the indie rock world, Bob Mould’s Patch The Sky has been one of the most hotly anticipated albums of 2016. This isn’t just false hype either. The former Husker Du and Sugar frontman has already released two exceptional albums on Merge Records (Silver Age, Beauty & Rain) and Patch The Sky is proof that he isn’t afraid to change things up and push not just his own limits, but also keep fans on their toes as well.

On the Merge website Mould has penned his own bio and press release, explaining in his own words the inspiration behind Patch The Sky. A few excerpts that speak volumes. “I’ve used this juxtaposition for years. This time, I’ve tuned it to high contrast.” “The search for my own truth kept me alive. These songs are my salvation.”

The first single was for the intimately personal “Voices In My Head,” which tackles that very issue head on. The accompanying video revolved around Mould staring down what is sometimes his own worst enemy: himself.

“Hold On” picks up where “Voices In My Head” left off. Bob has made it through the night, and we see his alter personas from the night before disappear with daybreak. As he makes his way into the streets he is approached by random strangers, each one asking him to “hold on.” He finds himself wandering into a local bar, and that’s when instinct takes over. After making sense of the diverse crowd he bolts to the stage, straps on his guitar and he finds the solace he’s been searching for. Music really does heal all!

As always we’re very pumped to be working with Merge Records to bring you more Bob Mould! He’s hitting the road this spring in support of Patch The Sky, so please don’t hesitate to get in touch to let us know if you’d like to get out to a show! You can contact Andy Gesner and the HIP Video Promo team at (732)-613-1779 or email us at info@HIPVideoPromo.com . You can also visit http://www.BobMould.com/ or http://www.MergeRecords.com for more info.