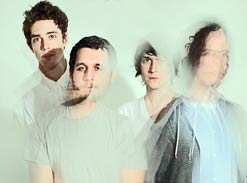 Greetings, programmers! It’s Andy Gesner and the HIP Video Promo crew presenting you with the latest musical outfit to come from our friends over at Warp Records. Referring to your own band as “the missing link between The Shins and Vampire Weekend” is quite a bold statement, but the Born Ruffians know just how to back it up. “What To Say” is a peek at the Born Ruffians trying to prove that – and, we have to say, they’ve done quite a fine job doing so.

“What To Say” is the lead single off of the Born Ruffians much-anticipated sophomore release, Say It. Hailing from Toronto, Canada, this indie rock band have made it a point to focus the single and album as a whole on what it means to communicate and how it affects relationships of all kinds. It sounds like a topic that has been addressed time and time again from bands similar to the Born Ruffians, but the trio takes a different approach, really honing in on the theme. Lead vocalist and guitarist Luke Lalonde told SPIN.com “What To Say” is “about how much and how little sense we make when we speak … It’s about the multitude of wrong words and the never-ending search for the right ones.” The Born Ruffians have also accompanied the song visually like it’s never been done before.

In the video for “What To Say,” Born Ruffians have taken the concept of shooting a music video to a whole other level. The video starts with the camera zooming in on a 1940’s oscilloscope. The instrument, more traditionally known for being used in sciences and engineering, starts forming waves that time perfectly with Lalonde’s vocals and guitar playing. The waves then take different forms and create silhouettes of the individual band members. At first, you wonder if anything more will come from the video, but then you realize it’s meant to be a freshly done performance piece. As the song ends, the camera zooms out of the oscilloscope. You’re forced to do a double take in your head as you try to figure out what it is you just watched.

Born Ruffians are quite the smart bunch, offering up songs that couldn’t be truer in context and presenting a breaking vision on how videos can be shot. The video for “What To Say” will without a doubt only further build anticipation for the release ofSay It, set to drop June 1.

Many thanks to the Warp Records team for sending the new Born Ruffians video our way. If you need more info, call Andy Gesner at 732-613-1779 or e-mail us at info@HIPVideoPromo.com. You can also visit www.BornRuffians.com or Warp.net to find out more about Born Ruffians