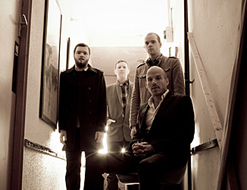 What’s up cherished programmers? It’s Andy Gesner and the staff of HIP Video Promo! What sort of thoughts would a glazed doughnut think if a glazed doughnut could think thoughts? Ever considered that? You probably haven’t, but that’s okay – Brakesbrakesbrakes has handled the inquiry for you. The British quartet’s new clip takes you inside the “mind” of a pastry unwrapped, withdrawn from a paper bag and about to be eaten. And this is no ordinary doughnut, either: it may have no volition, but it does have a powerful imagination, and a will to be a hero. In its fantasies at least, there’s nothing that can stop it once it gets on a roll.

No fan of Brakesbrakesbrakes will be surprised to be thus entertained: this highly unusual and amusing clip is brought to you by one of the UK’s most reliably inventive and ambitious bands. They rock as fiercely as do the Editors (whom they’ve toured with) and pen melodies and riffs as catchy as those by their Brighton neighbors The Kooks. And frontman Eamon Hamilton – the former organist from British Sea Power – has emerged as one of the most incisive and pithy lyricists working in contemporary pop. Their first two albums –Give Blood and The Beatific Visions – are already recognized as modern Britrock classics. Influential deejay Colin Murray calledBeatific Visions the best record of 2006. Robert Christgau loves both albums. And Ugly Betty licensed the band’s stinging “All Night Disco Party” for use, thereby introducing a mass American audience to Hamilton’s distinctive songwriting voice.

So it’s no exaggeration to call Touchdown, the soon-to-be-released third album by Brakesbrakesbrakes, a hotly-anticipated item. “Hey Hey”, the lead single, will not disappoint: it’s a relentless stomper, and it sports a guitar hook as barbed and biting as anything the band has ever crafted. Eamon Hamilton is in top form here, spitting out observations, challenges, and declarations of urgency, and hollering in a convincing imitation of Tarzan. It’s all impossibly energetic and supremely invigorating, and a good indication of how much excitement this band can generate in concert.

There’s plenty of performance footage in Nick Power’s clip for “Hey Hey”. But as commanding as Hamilton can be, we’re sure he’d be the first to agree that the true star of the video is the outsized glazed doughnut that rolls through these frames. It starts out unassumingly: a pink iced customer wrapped up in a brown paper bag. But via thought bubbles, we’re given a glimpse into its mind – and we’re shown that it’s fashioning something bigger for itself. Soon the doughnut has doubled in size, and it hits the street, looking for adventure, and gathering size, momentum, and menace as it rolls. A young woman at a bus stop – herself eating a doughnut – flees in horror. Our glazed hero flattens the proprietor of a pastry shop and “frees” the merchandise. By the end of the song, the doughnut is gigantic, looming over the city skyline like a confectionary King Kong. It all seems too sweet to be true: and it is. Alas, it’s all just a fantasy. The doughnut ends up where it was always fated to go – in Eamon Hamilton’s mouth.

We’re proud once again to be working in tandem with the good folks are FatCat Records to bring you yet another terrific video from their much-loved roster! They’ve hooked us in with a bunch of copies of Touchdown for all of your on-air giveaway purposes, so hit us up asap to get your hands on them! Also be on the lookout for the band’s US tour in May! We will be sure to keep you posted as Brakesbrakesbrakes passes through your city, reaching out to set up video interviews and IDs. If you need more info, call Andy Gesner at 732-613-1779 or e-mail us at info@HIPVideoPromo.com. You can also visit www.FatCat-USA.com or Facebook to find out more about Brakesbrakesbrakes.