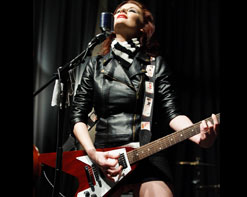 It was back in 2003 and HIP Video Promo was still in its infancy when we had the pleasure of working with an up and coming artist from Nashville named Marcel. We were instant fans and Marcel has since then continued to have a long and productive musical career. Fast forward to 2012 and we’re once again working with Marcel again, except this time he is behind the director’s chair! His directorial debut comes from a dynamic up and coming young Nashville rocker named BREE and her debut single “Whisky”, which is an unapologetic proclamation of her love for the distilled delight and the mischievous things it makes her do.

When discussing Marcel we stated that he had “seen a lot of life in twenty-eight years”. The same can be said and then some for BREE and her 22 years on this planet. After being kicked out of a Christian cult in Oregon by her father at 17, she eventually landed on her feet in Nashville and has linked up with some of the hottest players on the scene (standup bassist Mayrk McNeely and drummer David J Castello). And even though she is presented to us in a young and fit package, BREE has the soul of a well-seasoned rocker who has survived the world from a very dark perspective (BREE’s mother died when she was six from swallowing a needle). It is this life experience that she pours into her debut album, All American Girl, which fuses classic Rock guitar power chord progressions, a hard Latin rock rhythm and Jazz standup bass lines with modern production (legendary producer Bob Ezrin’s engineer Justin Cortelyou was at the helm) and a unique edge and attitude that only one who’s walked in BREE’s shoes can create.

Whisky (the Scotch spelling) is often considered to be an old man’s drink, but in recent years it has become a popular choice among the younger generation who have ditched the fancy wine coolers and novelty hard liquor in favor of the tried and true classic. After one listen to her new single “Whisky” and you’ll quickly understand why BREE gives it her thumbs up. When she can smell it on the breath she knows things are going to get frisky and the object of her desire can’t resist her, and what makes a girl feel sexier than to be desired? For the “Whisky” video, Marcel has created a vintage setting for BREE and her band. Shot in the ballroom of The Standard in Nashville (built 1845), BREE and her band tears through a smoking performance of the song and it’s only a matter of time before the laid back room picks up and the audience get on their feet, shouting their approval and loving every minute of BREE and her band. Maybe it’s the sight of a stunning girl in high heels with a Gibson Flying V strung over her shoulders, or maybe it’s the whisky, but this much is clear: they can’t resist her.

We’re very excited to be working with BREE and her team, as well as Marcel again, to bring you this seductively, rhythmic rocker! We think this video will be the perfect anthem to your wild nights and we hope that you’ll get the video into your programming. Please don’t hesitate to hit us up if you’d like to get your hands on the “Whisky” single or if there is anything else we can do on our end. If you need more info, contact Andy Gesner and the HIP Video Promo crew at (732)-613-1779 or email us at info@HIPVideoPromo.com.