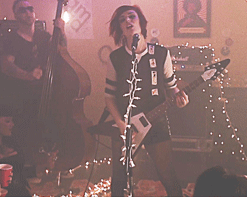 In a world where much of music has lost its passion and direction comes bree—a 24-year-old Christian cult castaway from Harrisburg, Oregon who discovered the truth the first time she plugged a Gibson Flying V and into a vintage Marshall amp.

With early musical influences ranging from Buddy Holly, Elvis Presley and Eddie Cochran to The Beatles, The Who, The Clash and The Ramones, bree has created her own unique style of 21st century rock ‘n roll, which is on full display on her debut album All American Girl. On AAG, bree intertwines real life experiences with her music, creating a refreshing raw and natural energy that has made her the breakout artist she is today.

After winning the RAW Nashville Musician of the Year last November, bree and her band recorded their album with producer Justin Cortelyou – the exclusive engineer for legendary producer Bob Ezrin. Teaming up with Werewolf Tunes has brought this Nashville rocker much deserved recognition, and her newest single “I’m The Boss” is blasting across airwaves and getting fans of every genre revved up for what is next to come from bree.

“I’m The Boss” blends hard driving American rock ‘n roll with bree’s relentless sexuality and aggressiveness. Setting up viewers with scenes of the ultimate fantasy, bree shows us just how rebellious she really is in this clip. With a house-party setting (the 19th century Joy Mansion in East Nashville), bree rocks her fans to the max. The story revolves around bree catching her man and his wandering eyes in a compromising position with another woman, but instead of just blowing up and throwing down fists, bree has another idea, something a little more up her alley! You won’t want to miss this. “I’m The Boss” is an off-the-charts rock ‘n roll smash that takes us to a whole new level.

The music scene needs a confident and unique new artist, and bree has just the right personality to fit the bill. For more information on this exciting new artist, please contact Andy Gesner and the HIP Video Promo staff at (732)-613-1779 or email us at info@HIPVideoPromo.com .