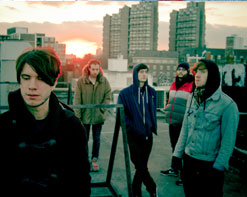 Hello fellow music lovers, it’s Andy Gesner and the HIP VideoPromo staff bringing you two mind-numbing clips from across the pond. London-based Breton is about audio and audio-visual autopsy; deconstructing and reconstructing popular culture. The band takes disparate elements from a variety of genres, chops them up, and uses the parts to build songs that are as moody and gripping as they are melodic. Their debut album, Other People’s Problems, due April 3 on FatCat Records, is a compelling collision of angular post-punk, grimy electro, noirish trip-hop, unsettling hip hop beats and orchestral flourishes. Atmospheric and darkly exhilarating, it is a confident statement from one of Britain’s most engaging and intriguing new bands.

Named after the father of surrealism Andre Breton, Breton the band was born out of the squat party scene and mastermind Roman Rappak’s formative musical experiences of post-Communist Poland’s pirate cassette kiosks where compilations of Portishead, NWA, Guns ‘N’ Roses and Michael Jackson were the norm. Influenced by such cinematic heroes as Jonathan Glazer, Mike Leigh and Chris Cunningham Breton initially formed in 2010 as a filmmaking collective but after they couldn’t find easily accessible places to show their films they began to add elements of tightly synched soundscapes and live performance, which quickly led to them being encouraged to release their accompanying soundtracks. As they transitioned into a full-fledged band they quickly found their musical identity. Their debut LP is the culmination of several years of experimentation, writing and forging an alluring sound.

So with this being said, it really shouldn’t be any surprise that the two videos we have for you are superb clips that are both professionally handled and superbly executed. The lead track for “Edward The Confessor” (also the current single) is a real slow burner filled with tension and angst. Interspersing grainy and mysterious shots of the band performing, we see various young adults staring down the camera in a slow motion application that allows us to see every detail and bit of emotion in their face and expressions. We’re not really sure where their suspicious interactions come from, but it’s clear they’re not happy.

The second offering is the video for “Interference”, which is every bit as mysterious as “Edward The Confessor”, with a decidedly more uptempo soundtrack. Shot entirely from an over the shoulder perspective, the video follows the daily life of your average Briton, waking up, taking the kids to school, reading the newspaper and chasing people down and holding them captive for brutal interrogations. You heard us right, look closely at these quick shots and you’ll be able to see some of the sinister behavior at hand. We can’t be sure whether he’s one of the good guys or the bad guys, but this high stakes clip makes us sure of one thing, we don’t want to cross him!

It’s always a pleasure for us to be working with the folks at FatCat Records and we’re certain that Breton will follow in the footsteps of previous successes like We Were Promised Jetpacks and Frightened Rabbit. We’re here to hook you up with copies of Other People’s Problems, and for the chance to catch them at one of their very limited number of US tour dates this spring! For more info call Andy Gesner and the HIP Video Promo staff at (732)-613-17779 or email us at info@HIPVideoPromo.com. You can also visit www.FatCat-USA.com for more info on Breton.