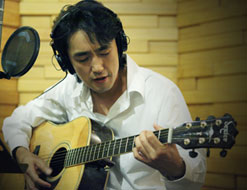 Greetings to all my esteemed programming friends! It’s Andy Gesner with the rest of the HIP Video Promo staff very proud to present you with the latest compelling singer/songwriter to emerge from the Pacific northwest. His name is Brian Lee, and he’s got a stellar new video called “Devil Hunting” that’s equipped with a serious message about the war and all the armed conflicts America is currently engaged in. However, Brian Lee never overlooks that it is still a rock and roll music video, and ensures every second and every note of the song remains enticing and entertaining. The most remarkable aspect of this video is that the viewer can take away what they want, whether it be a politically sensitive message or simply a great song with memorable hooks.

Brian Lee’s “Devil Hunting” is a multifaceted clip displaying the effect of war in both subtle ways and the more obvious. The video starts off with a kid sitting in a dark room, watching a show with men wielding around guns. It’s clear how impressionable he is with his eyes glued to the screen. Cut to the next scene of a young soldier putting on his army gear. He eventually joins his fellow soldiers as they march through the local civilization in which they are stationed. The video marries these two scenarios together while Brian Lee strums his guitar and random, exposed bystanders mouth of his lyrics. There’s the innocence of the young boy playing with his toy soldiers in the pitch black room, which is counteracted by the actual army men having to endure battle. The message is clear, especially when written on one’s hands: “War kills.”

In a video like this, you would almost expect the latter footage to be in the style of a documentary. But Brian Lee realizes that the war is still ongoing, therefore creating emotional characters who go along with their duty in real time. Even in the final scene, where a soldier dressed in his formalwear presents a folded up flag in the style of honoring one who has passed, the realness of war is ever-present. There’s delicateness to “Devil Hunting” due to Brian Lee’s airy voice, but it doesn’t make his message any less heartfelt and effective. We respect Brian Lee’s courage in expressing his views musically and visually, right down to the dedication at the close of the clip.

You can find the song, “Devil Hunting,” off of Brian Lee’s most recent album, Moth. In it, he joined forces with the likes of Adam Topol (of Jack Johnson fame) and Dean Butterworth (Good Charlotte, Ben Harper). # praised the album’s versatility, noting: “There is not one designated style or category allotted for this record, but the core of the music consists of a pop/rock platform with elements of folk. When hearing this album for the first time, you will pick up on a very genuine appeal that Brian Lee gives off when singing. Lee’s vocals/lyrics are crisp, clear and catchy as you will remain involved & intrigued throughout the whole recording.” And as for “Devil Hunting” itself? It’s a “pop/rock number that screams for radio play.”

We’re very excited to be working with an innovative artist like Brian Lee and are confident you’ll find his video for “Devil Hunting” effective in its purpose. We do have copies of his intriguing new CD Moth available to you for contests and giveaways, so please don’t be bashful about getting in touch with us to procure “all things Brian Lee”. If you need more info, call Andy Gesner at 732-619-1779 or e-mail us at info@HIPVideoPromo.com.