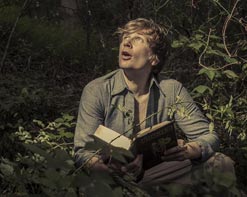 Blending elements of pop-rock, americana, and folk, Brian Mackey makes a captivating sound that connects. His music has been featured in a long list of movies and television as well as on the Songs of Love for Japan compilation, alongside Sara Bareilles and Ani DiFranco. Now, his fourth release and first full-length album–Broken Heartstrings–is poised to reach his largest audience yet and establish him as one of the finest new voices in American music. Considering the country is about to get acquainted with Brian Mackey, it’s fitting that his new single is a love letter to the Stars and Stripes, simply entitled “America”. HIP Video Promo is proud to present that song’s gorgeous clip.

Produced by Sam Ashworth (Lone Bellow, Civil Wars) and featuring the talents of some of Music City’s finest, “America” is an uptempo strummer that puts Mackey’s delicate and emotive voice front and center. A wistful and reverent account of his travels across the heartland, the song features lyrics that detail his journey in all of its quiet profundity. Early on he sings, “we’re so far out / it’s too late to turn around,” and he embraces the journey. In the song’s chorus, he sings, “Look out the window and all we see are fields of corn / the tears from the wind is in our eyes / and we’re happy we were born in America.” The song strikes a lovely, bittersweet tone with its relatively stark production of bass, banjo and acoustic guitar. But at its halfway mark, it opens up with drums and angelic background vocals before returning to its quieter state for its conclusion. But even after it’s final chord rings out, “America” will continue to play on repeat in your head and your heart.

The song’s video takes the viewer along with Mackey on his cross-country road trip, documenting the experience with a series of beautiful images as seen from the passenger seat of his car. In the morning, we see sunlight peeking through mighty oak trees. We drive along through the Blue Ridge Mountains. We see horses in a field, birds on a wire, and a hot air balloon in the sky. Occasionally, we watch Mackey sing and play his guitar as he sits on an old storefront porch. At dusk, we stop at a graveyard, and Mackey pays his respects to someone he’s lost. There are rows and rows of houses, diners, campfires, night driving, and plenty of other lovely scenes that really give a sense of the richness of the experience. There’s a lot of inspiration across this country, and this video certainly captures a slice of it, making for a lasting impression.

For more information on Brian Mackey and his moving clip for “America”, please contact Andy Gesner at (732) 613-1779, or e-mail the HIP Video Promo staff at info@HIPVideoPromo.com . You can also visit www.BrianMackeyMusic.com for more info on Brian Mackey.