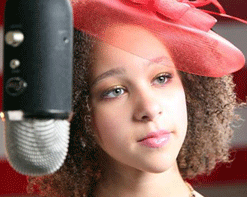 Briannagh Dennehy loves to perform. It’s been a defining part of who she is since the age of five, and what she has managed to accomplish in her mere 12 years is more than most artists can pull together in a lifetime. Whether it be church youth choir, dancing and acting in school plays, playing violin in talent shows, or performing in Broadway musical compositions, she can do it all. And she can do it with a fresh, youthful all-American look that has landed her roles in adverts for Splendid Clothing, Forman Mills, and web and print ads for a major health care agency.

Of course there are many young performers out there who may claim to have similar accomplishments but it’s not likely that they’ve put the same amount of time and effort into developing their talents as Briannagh. She’s worked with professional vocal coaches, piano teachers, and musical theaters vets and appeared onstage at some of the NY/NJ area’s most notable venues such as the Apollo Theatre and Carnegie Hall in NYC, McCarter Theatre in Princeton, and more. But don’t let all of these accomplishments lead you to believe that she is some overly serious, sullen child performer. She is a young, sprite, and ebullient kid that absolutely loves what she does and nowhere is this more apparent than in her new single and video for “American Fab Kid.”

The song is an upbeat and infectious declaration of her love of all things fab. She’s surrounded by a red, white, and blue motif, and also by her friends (who get a great shout out in the song) where they show off their dancing skills in tandem with the music and keep us engaged. A self-declared fasionista queen, Briannagh knows how to look as slick as she sounds. Whether it’s a formal red gown with a converted thrift shop hat, a casual sundress, or the every day denim and t-shirt, she looks every bit the true blue American Fab Kid! Briannagh also knows that while looking the part is big, it’s also about playing it smooth and having the right attitude. It’s a powerful performance and message from a star in the making!

It’s our distinct pleasure to be working with Briannagh Dennehy and her team to bring you this fun-loving Fab Kid and her stellar new video! We’d love to hook you up with anything you may need to include this video in your programming so please don’t hesitate to be in touch. You can contact Andy Gesner and the HIP Video Promo staff at (732)-613-1779 or email us at info@HIPVideoPromo.com.