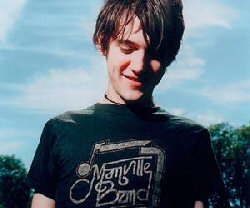 Greetings to all my colleagues in the video programming community. It’s Andy Gesner and the staff from HIP Video Promo and today we are enormously proud to be championing another outstanding music video project from our friends at Saddle Creek. Here at HIP we truly respect and admire the way this compelling group of savvy music lovers and keen marketing pioneers have turned the music industry on it’s head. These folks continue to prove that strict adherence to the DIY approach can reap huge rewards, as long as it’s coming from the heart.

We have loved all the bands on the Saddle Creek video roster so far (The Faint, Cursive, Azure Ray, The Good Life, Beep Beep etc.), but we’re incredibly excited to be working with Bright Eyes. Conor Oberst has proven that it’s possible to remain resolutely indie, garner a mass following through word-of-mouth, and still put songs and albums on the Billboard charts (his two new albums debuted at #10 and #15 on the charts). His dedication to Saddle Creek and to the extended family of musicians and bands who have recorded for the Omaha label is legendary. He’s been an inspiration to everybody involved in independent music.

He has also been wildly successful – by any standard. His shows sell out, his face graces the cover of hipster ‘zines and mainstream entertainment guides, and his album releases have become music news events. If the elliptical Fevers and Mirrors and the raucous Desaparecidos project established Oberst as a major songwriting voice, 2002’s expansive, emotionally generousLifted, or the Story Is In The Soil gave that voice to the nation.

The standard move after releasing a record as ambitious as Lifted would have been retrenchment, and consolidation of past gains. Luckily for us, Conor Oberst doesn’t make standard moves. His fans welcomed the new year with not one but two complementary new Bright Eyes albums: the acoustic I’m Wide Awake, It’s Morning, and the cool technopop of Digital Ash In A Digital Urn. Assisted by Jimmy Tamborello and Nick Zinner, among others, Digital Ash marries Oberst’s incisive lyricism to cool, evocative synthscapes. On the Dylanesque Wide Awake, the young songwriter stands (mostly) on his own.

I’m Wide Awake, It’s Morning chronicles the relocated Midwesterner’s experiences in New York City: its parties, its loves and aggressions, its drug casualties, its shadows. Like “Don’t Think Twice, It’s Alright” from The Freewheelin’ Bob Dylan, “First Day Of My Life” is both the romantic centerpiece and the emotional pivot on an album filled with vibrant sketches of New York City on the edge. Over spare acoustic accompaniment, Oberst sings a tale of love realized in a cracked, gorgeous voice that seems to bleed honesty.

The clip for “First Day Of My Life” is every bit as simple, naked, and bold. Directed by John Cameron Mitchell, the star and director of Hedwig And The Angry Inch, the camera captures couples’ reactions to the song. Gathered together in a living room, the pairs take turns sitting on a sofa; headphones on, they listen to “First Day Of My Life” and smile at the camera, at the wall, and at each other. There are all kinds of “couples” represented here; old and young, black and white, gay and straight. A pregnant women shares the song with her soon to be new child, questioning together what the future might bring. Responses vary: some are engrossed, some respond to the words, others seem self-conscious, others performative (one man even pantomimes the lyrics a little), others even seem impatient. What’s remarkable is how telling the reactions to the song seem to be – and how instructive those responses are. These momentary, fleeting sketches appear to grant striking insights into the relationships. Bright Eyes’s music shines a soft but illuminating spotlight on the pairs – and on a few sad, solitary singles who peer back at the camera with unspeakable emotion.

Thanks to Saddle Creek for bringing us in to help out promoting this high profile video. Here at HIP we have copies of the newI’m Wide Awake, It’s Morning and Digital Ash In A Digital Urn CDs for on-air giveways. Bright Eyes has taken their tremendous live show on the road and has been selling out up and down the East coast, but if you would like to be in attendance at an upcoming show (Bright Eyes will be touring later on in the spring with The Faint), or have any specific Bright Eyes needs, please don’t hesitate to get in touch. If you need more info call Andy Gesner at 732-613-1779, or email info@HIPVideoPromo.com. You can also visit www.Saddle-Creek.com to find out more about Bright Eyes.