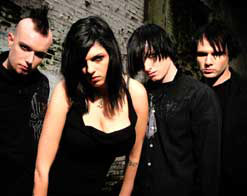 Warmest regards to all my music video programming pals! It’s Andy Gesner and the staff from HIP Video Promo, here with another superb video from a young artist on the rise. Britt Black opts not to leave much open for interpretation – she’s straightforward, tuneful, rocking, and monochromatically stylish. Her debut album’s title puns on her last name, and in case you don’t catch the reference, it’s right back in the middle of the handle of “Jet Black Heart”, the lead single. But it’s the first word in that title that really lets you know where Britt Black is coming from. She’s a Canadian incarnation of the legendary Joan Jett – right down to the Stratocaster power riffs, the rough-girl singalong choruses, and the all-black fashionable threads.

North of the border, the twenty-year-old Black is already a star. By the age of fourteen, she’d already assembled her own all-girl band: LiveOnRelease, a much-loved rock outfit signed to Warner Music. While LiveOnRelease had the capacity to be sweet, it was no prefab pop group – even as a teenager, Black could roar like a veteran rocker. When LiveOn Release broke up three years ago, the Toronto singer didn’t skip a beat: instead, she hooked up with the like-minded Bif Naked, and toured North America as her guitarist.

For Black, the collaboration with Bif Naked was more than just a logical pairing of talented, unconventional young women with a will to rock out. It was an education by association, an opportunity to expose her face to a massive hard rock audience, and also a sort of homecoming – at the age of ten, Black had co-written “Violence”, a song Bif recorded and released. The association with Bif Naked earned Britt Black even more notoriety than she’d already achieved on her own, and made Blackout a hotly-anticipated north-of-the-border release.

Blackout is a compendium of wicked intentions, punk defiance and fierce statements of purpose. Like I Love Rock And Roll – the album it most closely resembles – it has the raw power of an indie release, yet it’s thoroughly accessible. Black stomps, sneers and pouts her way through a set of blistering radio-friendly rock songs, culminating in an epic cover of the Cult’s classic “Sanctuary”. “Jet Black Heart” is the opening volley, and here Black blurs the line between put-down and come-on, alternately cajoling and excoriating the bad boy of her dreams.

When that bad boy appears in the clip for “Jet Black Heart”, he’s immediately recognizable: he’s the one in the seedy club who won’t dance, but instead walks to the lip of the stage and stands right in front of Britt Black, shaking his long hair and baring his chest. We know him because even in a room that seems to drip with depravity, he looks like the toughest customer. We know him by Black’s alternately awed and contemptuous reaction to him, and by the way her performance intensifies when he catches her eye. And best of all, we know him because of the tattoo on his chest: a black heart with jagged scars that echo the strings of Black’s Stratocaster.

Here at HIP we are very excited to be working with our friends at bodogMUSIC again to bring you this hard rockin’ clip! Britt will be playing the ShiraGirl Gritty In Pink stage at this summer’s Warped Tour, so please don’t hesitate to get in touch if you would like to set up video interviews or IDs. We also have plenty of copies of Blackout for all of your on-air giveaway needs. If you need more info, call Andy Gesner at 732-613-1779 or e-mail us at info@HIPVideoPromo.com.