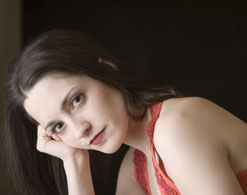 Hey, everybody, it’s Andy Gesner and the staff from HIP Video Promo, here to share an illuminating cover of a new wave classic, and the entertaining video that accompanies the track. Popular Bay Area singer-songwriter Brittany Shane didn’t make a conscious decision to cover “Pretty In Pink”: the idea came to her in a dream. Onstage and unable to remember the words to any of her own compositions, she found herself performing a song that had been scratched into her soul – and her bandmates, all Eighties kids too, had no problem playing along. Dream or not, it’s a believable outcome; there are few people under the age of forty who weren’t affected by the original record and the movie to which it lent its title. Upon waking, she assembled her group and cut this energetic version of the landmark Psychedelic Furs song. The re-imagined “Pretty In Pink” preserves the post-punk edginess of the original and adds to it Brittany Shane’s characteristic wit, energy, and passion. Recorded before the death of John Hughes, Shane’s “Pretty In Pink” feels particularly timely today: a testament to the enduring appeal and relevance of a cherished era of popular culture.

It’s also a vivid display of Brittany Shane’s skills as a singer and an interpreter. Best known for her smart, observant songs – tracks that often feel like sharply-written short stories – Shane frequently saves her offbeat covers for her captivating concert performances. A concert fixture in the Bay Area, Shane has shared bills with (among others) The Breeders, Liz Phair, and the not-dissimilar sounding Aimee Mann. The San Francisco Chronicle loves her and raves about her shows and her independent releases; commercial radio station KFOG named her a Spotlight Artist in 2008. Have Heart Live Young, her most recent release, promises to win the young singer recognition far beyond coastal California. Engineered by the legendary Joe Chiccarelli (The White Stripes, U2, My Morning Jacket, too many others to list), the stunning-sounding Have Heart Live Young is a glittering collection of pop gems. Songs from the set have already scored the award-winning cult film The Village Barbershop and appeared in episodes of Bad Girls Club and Living Lohan, suggesting Shane’s scope, flexibility, and cross-generational appeal.

She’s an eyeful, too, and more than comfortable in front of the camera lens. Brittany Shane looks the part of the literate pop star – well-dressed, winsome, and quietly confident. In the “Pretty In Pink” video, she plays a waitress daydreaming about the rock and roll lifestyle; to get into the part, she’s donned a blonde wig and a diner apron. (She’s got the requisite pink lipstick, too, but most of that ends up scrawled on a bathroom mirror.) But Shane appears as “herself”, too, leading her band through the paces at a nightclub, and it’s a powerful demonstration of the kind of electricity she can generate in concert. Every shot sparkles – and the closer the camera gets to Shane’s face, the farther we’re drawn into the song.

We’re very excited to be working with Bob Spector and the crew at Painted Lady Records to bring you this most excellent new clip. If you need more info, call Andy Gesner at 732-613-1779 or e-mail us at info@HIPVideoPromo.com . You can also visitwww.BrittanyShane.com to find out more about Brittany Shane.