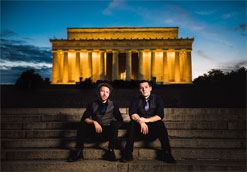 With their previous releases for “As Long As I Can See” and “Higher,” DC’s Broke Royals have navigated a path that intersects soaring pop rock songwriting, deft production skills, and emotion-filled lyrics. They’re such an easy listen that it sometimes takes scratching that surface a little harder to understand the wonderful depths and complexity that Colin Cross and Philip Basnight are exploring with their music.Their new single “Bad Chemicals” captures the uncertain moment we’re facing as Artificial Intelligence intersects with Biotechnology, delivered on Broke Royals’ signature anthemic pallet. On what is undoubtedly their most ambitious release yet, Broke Royals channel their musical heroes, U2 and Bruce Springsteen, as they tackle one of society’s most pressing issues: the rise of Artificial Intelligence, with anthemic rock and gripping narrative lyrics.

Inspired and informed by the work of best-selling author Yuval Noah Harari, the lyrics describe a protagonist who struggles with PTSD and their decision whether or not to undergo surgery for new AI-powered biotechnology, which the US government is currently testing to treat the mental illness. Broke Royals open up this important discussion with soaring riffs and stirring rhythms.

Not only does the song show the band flexing another side to their sound, but it also showcases the directing qualities of their collaborating partner Scott Hansen. Hansen has shown previously that he’s no slouch when it comes to capturing sweeping shots of gorgeous landscapes, but with “Bad Chemicals” he really opens up his skill set to tap an undeniably human vein. It’s heartbreaking to watch the raw emotion displayed by the actors onscreen: veterans themselves, they portray two veteran siblings and what happens when one of them doesn’t come home, which Hansen captures beautifully. This is, however, not a video about the wars abroad; it’s about the battles that are still fought even after coming home.

For more information on Broke Royals, please contact Andy Gesner and the HIP Video Promo team at (732)-613-1779 or email us at info@HIPVideoPromo.com. You can also check out www.Facebook.com/BrokeRoyals for recent updates on Broke Royals or visit www.BrokeRoyals.com.