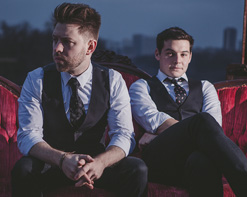 There is no doubt that music is an incredibly powerful force in the world. What Philip Basnight and Colin Cross of Broke Royals didn’t realize, is just how much their own music can achieve the same strength. When the two musicians from Washington, DC met in 2014, Collin had asked Philip to record at Unkempt & Overcaffeinated Studios, where the project blossomed naturally. The two never anticipated starting a band, let alone inspiring a nation halfway across the world: Thailand.

In May of 2014, a military coup overcame Thailand’s people, and its citizens discovered Broke Royals’ debut single “About Time” right in the midst of it all. Given their situation, the citizens resonated with the song and immediately felt connected to the band. Broke Royals were even invited to play a benefit show, but coming to Thailand would be greeted with their arrest.

Broke Royals did not stop there, and their new song “As Long As I Can See” proves that they have a lot in store. By blending pop, rock, and even EDM, Basnight and Cross have developed a sound that perfectly matches the mood of the music video. It starts with beautiful scenery; a forest, the water, and a beautiful sunset enveloping the band with it’s light. Almost immediately, we meet different women and girls who provide a special and beautiful element to the visual: sign language. Their hands gracefully follow the lyrics, and bring on a whole new meaning to them as well.

And along with the superb craftsmanship of the production and their impeccable attention to sonic detail, these guys can really sing! “As Long As I Can See” wraps the listener in gorgeous sonic gauze, while the sweeping chorus glitters like the best, catchiest hook you’ve never encountered on Top 40 radio this year. Broke Royals’ songs are terrific, their look is dazzling, the message is timely, and the sky’s the limit!

You can find “As Long As I Can See” off of their upcoming self titled album coming out November 17th. Though the musicians are back in DC, there is no doubt that their songs will journey the world once again, and inspire many. This dynamic duo are impossible not to root for…their soaring anthems, relentless creativity and songwriting savvy sets them apart from the crowded Indie Nation musical mosaic.

It’s a true honor and profound privilege to welcome Broke Royals into the fold here at HIP Video Promo and we’re ecstatic to share this new “feel good” video with you and your viewers, not to mention the deaf community from around the globe (they’ll love it too!). Please don’t be shy about getting in touch to let us know what we can do on our end to get this video into your programming and rest assured we’ll have plenty of outstanding Broke Royals merch to set up online/on-air contests and giveaways throughout the campaign Please contact Andy Gesner and the HIP Video Promo team at (732)-613-1779, email us at info@HIPVideoPromo.com or visit www.BrokeRoyals.com for more info on Broke Royals.