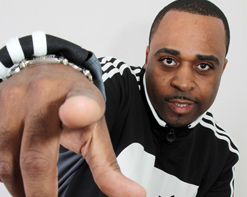 Bruse Wane is an artist who is on a crusade to return hip-hop to a golden age when substance trumped ego, and having a good “style” was more of a reflection of the quality of the content and not the name on the label of a wardrobe. Though he was born in Jamaica he calls New York City home. Growing up in the Soundview section of the Bronx, he began his rap career under the name True, but he soon believed his true calling was behind the scenes. Thus, Bruse Wane and Wane Enterprises was born. Like the namesake from the Batman universe (with a few cleverly swapped letters), he established himself as deft businessman.

Eventually, Bruse realized that there was nothing holding him back from being a one man operation. Manger, promoter, AND talent all in one. He released The Dark Knight EP – Return To Hip-Hop’s Golden Era. This collection of songs from his early recordings was the perfect reintoduction to Bruse, who’s followed it up with the exceptional new album, The Earl Manigault Of Rap. He’s kept his chops sharp over the years, injecting some fresh wisdom into his updated sound. He’s brought in some friends this time, including Big Pun’s up and coming son, Chris Rivers, as well as the final verse ever recorded by hip-hop legend Sean Price. The new single “Brighter Days” is a culmination of years of studious effort and the wherewithal to see the bigger picture in life.

“Brighter Days” is a journey with Bruse Wane as he spends a day rolling through the streets of NYC and bucolic paths of Central Park. As he navigates the metropolis, he passes by a handful of landmarks such as the Apollo Theater, the Frederick Douglas sculpture, and Dr. Martin Luther King Jr. Boulevard. Clearly this is an artist in tune with his heritage and is proud of the ability to overcome a past checkered with injustice and inequality. Despite the hard roads he’s had to walk, he still keeps his chin and his message positive. Brighter days are still ahead.

We’re all incredibly excited to be a part of the Bruse Wane and Wane Enterprises to bring this stellar, insightful new jam. To find out more about Bruse Wane and the “Brighter Days” video, please contact Andy Gesner and the HIP Video Promo team at (732)-613-1779, email us at info@HIPVideoPromo.com. You can also visit www.BruseWane.com for more info on Bruse Wane.