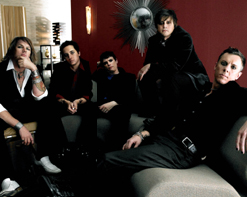 Greetings from the Nor’ East! It’s Andy Gesner and the staff from HIP Video Promo, a little waterlogged from the recent weather, but still kickin’ and back with another terrific clip from a group of indie rock champions! Burden Brothers is sometimes discussed as Vaden Todd Lewis’s band, and considered an extension of the work he did as the heralded frontman of the Toadies. It’s understandable, perhaps; Lewis helped to form the Burden Brothers, and the new combo shares many virtues with his old outfit: a huge rock sound, thought-provoking lyrics, anthemic choruses that demand to be shouted along with, and a cathartic approach to instrumental performances. Just as the Toadies once did, the Burden Brothers play bracing, confrontational alt-rock; stark, dynamic, and reminiscent of the Pixies at their heaviest.

But indie rock aficionados – and not only those who live in the Dallas-Fort Worth area – will recognize the Burden Brothers as something of a supergroup. Taz Bentley, drummer and co-founder, played for years with Horton Heat, and he’s brought more than a little of the Reverend’s maniacal blues-punk rhythms to the party. (Bentley also rocked with Duff McKagan and Izzy Stradlin in Loaded – so you know he’s bound to hit hard!) Corey Rozzoni – recently voted the finest guitar player in the Dallas metro area by the readers of the Observer – was a core member of garage-pop standouts Clumsy. Guitarist Casey Hess and bassist Zack Busby are also indie veterans, logging time in notable local bands. This is no solo project: it is an amalgamation of ideas contributed by five wild and unhinged Texans, each with his own slightly different approach to alt-rock abandon.

Lewis and Bentley co-produced Buried In Your Black Heart, the quintet’s raw and uncompromising debut.That album, and its single “Beautiful Night,” established the Burden Brothers as talented independent rockers. On Mercy, their blistering follow-up, they worked with the storied Joe Chiccarelli (Shins, Beck, U2) and David Castell (Blue October) to fashion an intense, muscular, and surprisingly varied set of modern rock songs. “Shine”, the second single, is a true collaboration: all of the Burden Brothers share the writing credits, and each musician adds something indelible and distinct to the mix. As anybody who’s seen the act in concert will tell you, the five Brothers operate with the cohesion, integrity and power of a closed fist.

The group has toured with (among others) Velvet Revolver, Breaking Benjamin, Hinder, Papa Roach, and Finger Eleven, and the Burden Brothers, who are always on tour, are currently setting East Coast cities ablaze on a month-long swing through our region. Director Travis Kopach (Panic! At The Disco, Thursday, Buckcherry) captures the heat and fury of the band’s live act. Head tilted and shoulders hunched, Lewis stares down the camera; behind him, a menacing Bentley twirls his sticks and hammers his snare with venom. The clip washes in with a field of solid red; the band emerges from within the stage-set as if a crimson mist is parting around them. But the backdrop of the clip stays blood-red, and from time to time, the group fades out as the intense color overwhelms them. A crowd has gathered in the room, too – some are protestors, and some are policemen wearing gas masks. They’re covered in red, too; their faces are obscured. They clash behind the drum kit – and then the melee spreads to the stage set, and the Burden Brothers are caught up in the confusion of demonstration. As the red tide rises and the camera swirls around the room, they keep right on playing and singing, fighting off the combatants as the room dissolves into pink dust.

From the same folks who’ve brought you other great music such as The Hourly Radio, it’s a pleasure to be working again with Tami Thomsen and our fun-loving friends at Kirtland Records! Burden Brothers are currently on the road and will be touring here in the states through the South and Mid-Atlantic through the middle of May, so we’d love to help set you up with a video interview, video ID, or even tickets for giveaways! As always, we’ll also have plenty of copies of their CD Mercy, and we’d love to set you up with some! If you need more info, call Andy Gesner at 732-613-1779 or e-mail us at info@HIPVideoPromo.com. You can also visit www.KirtlandRecords.com to find out more about Burden Brothers.