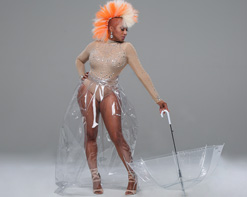 Sometimes success is largely a matter of hanging in there when most others would have folded up like a cheap lawn chair. When she was only 13 years old, Oleathia Robinson – now known to most as Butta B-Rocka – began performing in talent shows in her native Tampa, Florida. Just two years later, at 15, she began making regular trips to Atlanta to work with Bobby Brown Camp, Usher and Akon. Starting off in a singing group, her mom – who was also her manager – pushed her to pursue a solo career, and eventually, she agreed. Her solo career wasn’t without setbacks (a car accident forced her to put two potential record deals on hold, which she then lost). Butta soon realized no one would believe in her the way she believed in herself, she created her 1st album, formed her band, and began touring nationally and internationally.

Robinson had gained the nickname “Butta” back in Tampa due to her smooth vocals, and was called “B-Rocka” while in the studio providing demo background vocals for TLC. In 2010, she merged the two names and “Butta B-Rocka” was birthed. Her first album “Switch Lanes” was pop, with some soft-rock influence (she cites Rihanna as an influence), but now Butta B-Rocka is focusing more on R&B, taking after artists like Chrisette Michelle and Sza.

Butta’s latest track was inspired by the true story of a friend of hers. It’s called “The Storm”, and this one turns a common situation on its head. “The song is about if the shoe was on the other foot – some men cheat and they come home and act like nothing’s happened, they expect the wife to still be there even if she finds out; but when the situation turns and the woman cheats – can you weather the storm?” Filled with shots of Butta singing in moody blue and violet lighting, the video for “The Storm” shows a woman finding lipstick on the collar of her husband’s shirt and a hotel room key with a note from another woman– but soon, the tables turn and she begins to cheat. The two are forced to weather the storm and decide if their love for each other means more than leaving each other.

We’re profoundly thrilled to be working with Butta B-Rocka to bring you “The Storm” music video. With an album on the way later this year, as well as live performances everywhere from Georgia, Dominican Republic, Jamaica to Hawaii, 2018 is set to be a banner year for this musical visionary. It’s our sincere hope that you and your viewers will flock to “The Storm”, share it on your socials, and add it to your programming in a timely fashion. Rest assured we will have plenty of outstanding Butta B-Rocka merch to set up online/on-air contests and giveaways throughout the campaign. Don’t hesitate to let us know what we can do to help you spread the importance of Butta B-Rocka. Please contact Andy Gesner and the HIP Video Promo team at (732)-613-1779, email us at info@HIPVideoPromo.com. You can also visit www.ButtaBRocka.com for more info on Butta B-Rocka.