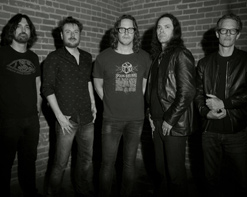 In a storied rock ‘n’ roll career of multi-platinum albums and timeless, ubiquitous radio smashes, Candlebox’s sixth studio album, Disappearing In Airports, finds the renowned lineup infused with a new energy and openness. The band originally made their mark on rock radio with hits like “Far Behind” and “You,” and the new single for “Vexatious” carries that torch with the same infectious rock and roll perfection and pedigree.

After the amicable departure of original members Scott Mercado and Peter Klett, frontman and founder Kevin Martin found the creative process very therapeutic this go-round; without two original members, he says, “there was more freedom for me to express myself.” Ultimately, while Disappearing In Airports is clearly Candlebox, Martin observes that the record, compared to its predecessor is “banked right turn; I don’t think it’s 90 degrees but we are taking chances. You’ve got to push yourself outside of that comfort zone.”

The first track to radio (and video), is the left-of-center “Vexatious” (a Martin-created word) that hooks you in immediate with the drums and irresistible chorus. It is Martin at his editorial best – poignant, lyrical driving the message of the perils of a digitally-connected yet emotionally disconnected world in a powerful rock song.

It’s an exquisitely shot clip along the Santa Monica waterfront with a sepia toned saturation that takes this sunset narrative to a killer new level. But it’s not just pretty scenery, there’s also a social narrative in there about trying to be heard in a crowded, shortsighted world that any viewer can appreciate and relate to. “Vexatious” is about this emotionally destitute, social networking-obsessed society we live in. People come off as insecure, yet still so entitled with unlimited bragging rights,” says Martin. Of course, the performance by the retooled band is a perfect compliment to the story, which we’d naturally expect from a group that has been tapping into hard rocker’s musical hearts for over two decades!

All of us in the HIP offices have been fans of Candlebox since the early days and it is a treat to have the opportunity to be a part of their team. The band will be touring extensively surrounding Disappearing In Airports, so please be in touch if you’d like to catch them live! You can contact Andy Gesner and the HIP Video Promo team at (732)-613-1779, email us at info@HIPVideoPromo.com . You can also visit http://www.PavementMusic.com/ or http://www.CandleboxRocks.com/.