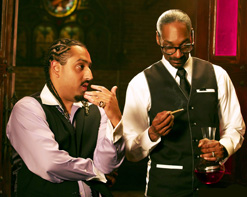 Hello programming brothers and sisters! It’s Andy Gesner and the HIP staff, here with a hip hop clip from a rapper whose history extends into the territory of iconic legends and whose video features one the biggest stars in the genre. Brace yourself for the next feel good party anthem from Candyman 187 featuring Snoop Dogg & Ariano “High Off the Fame.”

Candyman 187 is equal parts street poet, gangster rapper and sinner on his way to hip hop sainthood. During his early years, Candyman 187 was mentored by the legendary Tupac Shakur and Yaki Kadafi of the Outlawz. A strong bond developed amongst the trio, who then went on to form the group The Havenotz. Candyman 187 now continues that legacy, moving The Havenotz forward and onward. Thanks to the rapper’s hard work ethic and undeniable charisma, the group has earned Album of the Year and Artist of the Year at the Los Angeles Music Awards. What also sets Candyman 187 apart from many performers in the genre is his taste to make the live show a spectacle. Not your typical MC and DJ setup, Candyman 187 outshines many national headliners with a 13 piece live band making sure that every last sound is heard, felt, and seen. The group is also partly managed by Tupac’s original manager, Leila Steinberg.

“High Off the Fame” is a dancy party anthem that will have viewers shuffling in no time! The song features Candyman 187 and Snoop Dogg trading verses to a fast beat and catchy synth melodies. The track is a mixture of classic old school hip hop and new school euro-style house pop, colliding substance with pleasure. The song also shifts into a full on dance groove towards the last quarter, which will surely get drinks raised and spilling in the air! The video features Candyman 187 arriving at a secret “player’s club” party where he is handed a mysterious red drink that everyone in the place seems to be consuming in an almost vampiric manner. The drink quickly intoxicates the rapper as he stumbles to get across the room while beautiful women do their best to seduce him. One of the girls then leads him into a dark room where he is greeted by The Doggfather himself! The whole thing then heats up as Candyman and Snoop enjoy all of the women at once, as they flatter them with a synchronized routine. This top notch clip is the kind of stuff that puts the nightlife on the dance floor, so expect a riot!

We are honored to be part of this star studded campaign and hope you will join us in celebrating this most arresting clip. The song is already making a big splash on the net, being featured in blogs and fansites including TruthAboutTupac, Mix Bullies,HipHop Early to name a few. This song is from Candyman 187’s new record If tomorrow never comes (Chasing the pain), and we’ll gladly hook you up with a copy for your listening pleasure upon request. If you need more info, call Andy Gesner at 732-613-1779 or e-mail us at info@HIPVideoPromo.com. You can also visit Facebook to find out more about Candyman 187 and any show dates near you.