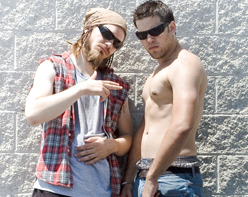 Greetings and salutations! It’s Andy Gesner and the staff from HIP Video Promo, presenting you with an outrageous new video we’re sure you’ll love. By now, unless you’re totally impervious to Internet hype, you’ve probably gone to see Snakes On A Plane at least once. The virally-marketed film sensation rode the weblog mania to the #1 position on the American box office charts. Yes, Snakes is a hit – and was there really ever any question that it would be? Never had so much pre-release movie hype been generated by so many people who had no relationship to a studio. Enthusiasm for Snakes On A Planeswept over the ‘Net to such a degree that even New Line Cinema themselves got in on the act: partnering with CaféPress.com to allow fans to mass-market homemade tee-shirts and iconography, incorporating dialogue from Internet parodies in to the final script, and encouraging the filming of satirical trailers. They even threw open a slot on the soundtrack to a contest-winner by partnering with social-networking site Tagworld. New Line and Tagworld received countless submissions from enterprising bands – and when all the entries were evaluated, Captain Ahab walked away with bragging rights and a place on the enhanced version of the soundtrack CD.

How did they win? Perhaps by confessing that, like the rest of America, they had “Snakes On The Brain”. With the sort of enthusiasm for pop-culture detritus that can’t be faked, Captain Ahab assume the robes of a blistering (and hilarious) rap-rock combo to bellow our their snake preoccupation. The Los Angeles artists can always be counted on for good-humored, roughneck fun: their last 12″ single was for the 2 Live Crew inspired “I Can’t Believe It’s Not Booty”. Their song for Snakes On A Plane sounds and feels like a lost White Zombie classic – it’s an infectious growler with a huge backbeat, a shout-along chorus, and some surprisingly witty couplets.

For the “Snakes On The Brain” clip, Captain Ahab calls again on the talents of video collaborator Lawrence Klein. Klein shot the spot for the Captain’s prior singles – “I Can’t Believe It’s Not Booty” and the uproarious “U Want Me” – and stuffed them full of as much ass, sunglasses, blood, bikinis, and gratuitous skin shots as he could manage. In other words, he is the ideal filmmaker to tackle “Snakes On The Brain”: a director with a twisted vision and a penchant for endlessly entertaining overkill.

Snakes On A Plane seems to have brought out the glorious, over-the-top best in everybody in its demented orbit, and Lawrence Klein and Captain Ahab are no exception. Fueled by beer and wine and surrounded by scantily-clad women, the band parties in the desert, accosting the camera occasionally, but more often laying back and playing with snakes. Giant slithering reptiles hang in the backdrop (perhaps representing Captain Ahab’s mental state – but let’s not read too much into a clip so campy), while others crawl across the road or hang over the shoulders of the booty girls. One snake even does its sinuous dance as a tattoo on the belly of a fat man. There’s some extra blood, guys dressed in monk outfits, and a few near-obscene shots of champagne shooting out of a bottle, but for the most part, “Snakes On The Brain” delivers exactly what it promises: red-hot reptilian fun, and a group loose and playful enough to truly appreciate it.

We’d like to thank Brian Miller at Deathbomb Arc for bringing us onto the team for this crazy cool video. We’ll have plenty of Captain Ahab CDs for your on-air giveaway needs. This video is unabashedly poised to cash in on the hype the movie has generated, and it will surely generate a buzz of its own. If you need more info, call Andy Gesner at 732-613-1779 or e-mail us at info@HIPVideoPromo.com. You can also visit www.DeathbombArc.com or Bandcamp to find out more about Captain Ahab.