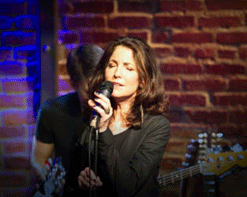 Carey Appel began belting her melodic tunes off of her backyard balcony at the early age of three. “Such a grown up voice for such a little girl” was most often heard. Grammar and high school musicals abounded until a coach skipped over her for “Fiddler on the Roof”. Carey gave up music during college and after graduating from UC Berkeley, followed in the family tradition of retail. She opened a chain of gift and home stores, though singing was always her first love.

With a personal life-changing event, this captivating performer and soulful storyteller returned to the music community in 2011 with her first album, New Favorites. Her company, (aptly named Heather Road for the street she grew up on), produced the album of aurally seductive vocals influenced by Melody Gardot, Patti Griffin, Cheryl Wheeler and Judith Owen. Her 2012 album House of Cards demonstrates Carey’s innate passion and musical finesse, a collection of diverse and riveting acoustic singer/songwriter and rock arrangements with a sophisticated folk flair. It is an intimate and compelling journey to finding one’s own empowerment – where listeners may even hear a piece of their own story woven into Appel’s candidly-written lyrics.

For her new single and video, “Stolen”, Carey has continued along this artistic trajectory, and created what may be her most accomplished music yet. The song is a delicate performance expressing her dedication and commitment, while alluding to the subject of loss. In this video, two young adults live before our eyes the highs and lows of a relationship, ultimately leading to the final outcome, which you’ll need to watch the video to see. All the while, shots of Carey serenading the camera from multiple serene locations are interspersed, completing the story and giving this video a wholly accessible and enjoyable experience.

A performer in the LA area for only a decade, it’s hard to believe that Carey has been writing her own compositions for just under two years. She continues to write, and inspire and support budding artists and members of her community. Over the years she has dedicated herself to helping children at the Performing Arts Program of Children’s Institute – an organization that treats abused children and their families. A portion of album sales supports this endeavor. For more information on Carey Appel, please contact Andy Gesner and the HIP crew at (732)-613-1779 or email us at info@HIPVideoPromo.com . You can also visit www.CareyAppel.com for more info.