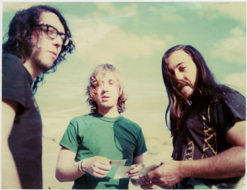 Greetings to all of my valued music video programmers! It’s Andy Gesner and the staff from HIP Video Promo, back with another spry new video from an emerging band with an unexpected and refreshing sound: Catfish Haven. While there isn’t a musician working in America who has not been influenced in some way by Sixties and Seventies soul, few indie bands wear their Stax and Motown and Van The Man roots as proudly as Catfish Haven do. Lead singer George Hunter’s husky baritone has been compared to that of Otis Redding by CMJ – and we doubt he could imagine a higher compliment! The Chicago trio has astounded Midwestern audiences by taking stages wherever they can, and delivering an inspired fusion of blues, country-soul, groove music, and indie rock.

The band also looks unusual, and it’s not the beards, long hair, and vintage tees; those we’ve all seen before. It’s not what Catfish Haven wears, it’s what they play: acoustic guitars in an indie rock context. Yet there’s nothing fragile or wispy about the music they make. Credit the members’ backgrounds in Chicago punk bands: whether plugged in or not, they perform with abandon, and make a racket. On Tell Me, their debut full-length, the trio varies its arrangements. Sometimes the elastic bass takes the lead, sometimes the drums commandeer the track, and sometimes Hunter’s huge voice is all that’s necessary to raise the intensity of the mixes. In concert, Catfish Haven is capable of raising the temperature of a room just by themselves, but recently the three-man strike force has been augmented by six (!) other musicians at selected shows. As word of their incendiary shows has spread, Catfish Haven has recently shared stages with The Hold Steady, My Morning Jacket, and Magnolia Electric Company – and come November, they’ll be taking the act to the U.K.

“Tell Me”, the title track, is a rootsy sock in the gut, and a showcase for Hunter’s emotive vocals. Like many of the songs on the Catfish Haven debut, it’s a tale of a relationship in trouble, and of a desperate attempt to bridge a communication gap. The clip for “Tell Me” animates the lyric: we’re shown Hunter on an old-fashioned land-line telephone, standing in the kitchen and holding the receiver, testifying to a woman in bed in her apartment. She’s by herself, but Hunter is anything but. His bandmates flank him and play their instruments as he sings; they’re the ones who rouse him and tell him to pick up the phone in the first place. It’s the morning after a crazy party (we can tell by all the half-empty whisky bottles scattered around the living room of the flat), and the Catfish Haven extended crew slumbers on the sofa, deeply hung over. “Tell Me” sets them in motion. Though eyes closed and groggy, the sleepers raise their hands and clap to the backbeat. Later, still slumbering, the camera finds the friends with tambourines in their hands, shaking along to a groove so infectious it could animate the dead.

Here at HIP we’re delighted to team up yet again with Jonathan Cargill and his staff of audacious music aficionados at Secretly Canadian on this excellent video. We’ll have a nice stock of Catfish Haven’s new CD, Tell Me for on air giveaways and promotions. Watch out for Catfish Haven when they return home from their stint in England with labelmates, I Love You But I’ve Chosen Darkness in November. If you need more info call Andy Gesner at 732-613-1779, or email info@HIPVideoPromo.com. You can also visit www.SecretlyCanadian.com to find out more about Catfish Haven.