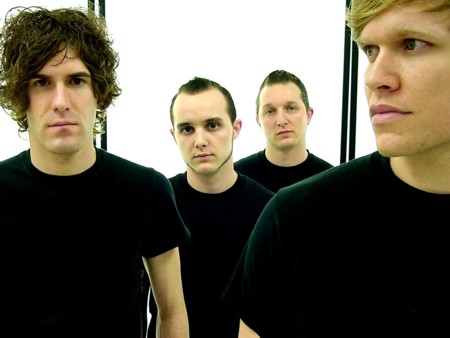 Hi it’s Andy Gesner and the staff from HIP Video Promo saying what’s up? The fall is nearly upon us and we are very proud to present to you another awesome band from the up and coming independent label Doghouse Records. Doghouse have brought you The All-American Rejects and this spring’s break out Florida rock outfit Sunday Driver. Doghouse embodies the true DIY, grassroots aesthetic and are totally stoked about all the killer vids they will be releasing this fall.

The first clip to come to you from Doghouse is from Celebrity for their first single “Disconnected.” A tireless and highly touted indie rock phenomenon, Celebrity are unafraid to play music “outside the box” of what’s been considered the “norm” for their musical kindred spirits. This quartet are an ultra-tenacious touring machine that continue to show the guts and poise that have made them one of the most well liked and self assured bands making the rounds on the indie rock touring circuit.

Alternative Press proclaimed that Celebrity’s debut CD Lovesick is “a must-have for anyone starting to wear out their Coldplay and Interpol discs.” High praise from the widely respected AP, yet the band wears many hats and is unafraid to “push the envelope” musically. Lead singer/guitarist Lance Black’s passionate, emotive vocal musings are robust and earnest, exhibiting a confidence and swagger that enhance his reflective, personal confessions. Celebrity is versatile, multifaceted and terrific at blending emotional, angst ridden underground rock with the nuances associated with the “golden age” of post new wave Brit-rock brilliance. Sometimes other worldly, Celebrity still can rock (“Remember Us”) and are proficient at penning pop ballads like the title track (“Lovesick”) and atmospheric, ethereal epics like “Circulate.”

Though you’d never know from listening to them play, the members of Celebrity hail from Nashville. Their sound, however, is closely akin to that of England in the early 1980s. Echoes of The Cure, The Smiths, U2 and similar bands are readily apparent in “Disconnected,” a selection from Lovesick that combines a moodiness and sincerity that is striking in it’s expressiveness.

Drummer Matt Fine, along with brother Jesse on bass, provide a solid rhythmic underpinning for the richly textured guitar sounds of Black and Ryan Parrish. Black caps it all with a beautifully crafted, lush and melodic vocal. It picks up where their first recording, the “sleep” EP left off. (A song from “sleep” was featured in the movie swimfan.) The video was directed by indie rock veteran Darren Doane (XDOANEX), who’s also worked with such artists as The Deftones, Jimmy Eat World and Thursday. “Disconnected” depicts the band performing in an austere studio setting, captured in artfully atmospheric lighting with deft camera moves and crisply paced editing.

HIP Video are huge fans of Celebrity, Doghouse Records and very excited to be a part of this campaign. We are going for adds for “Disconnected” on September 5th and 8th and have tickets to see Celebrity this fall when they are on tour all across the country opening for The Juliana Theory. Call Andy Gesner at 732-613-1779 or you can e-mail info@HIPVideoPromo.com for more info, and if any programmer wants to do an interview we can hook it up in a heartbeat! Any programmer that adds the “Disconnected” video for the add dates of September 5th and September 8th will automatically be entered in the “Look like a Celebrity” contest. Each programmer will receive Lovesick CDs and cool Celebrity t-shirts for on air giveaways. On October 15th there will be a drawing of all the programmers that have added the clip and the winner will receive a $100 gift certificate to Sunglass Hut!